In the Anatomical Therapeutic Chemical (ATC) classification system, the active substances are divided into different groups according to the organ or system on which they act and their therapeutic, pharmacological and chemical properties. Drugs are classified in groups at five different levels.

The system has fourteen main anatomical or pharmacological groups (1st level). The ATC 1st levels are shown in the figure.

The 2nd, 3rd and 4th levels are often used to identify pharmacological subgroups when that is considered more appropriate than therapeutic or chemical subgroups.

The complete classification of metformin illustrates the structure of the code:

Thus, in the ATC system all plain metformin preparations are given the code A10BA02.
For the chemical substance, the International Nonproprietary Name (INN) is preferred. If INN names are not assigned, USAN (United States Adopted Name) or BAN (British Approved Name) names are usually chosen.
The coding is important for obtaining accurate information in epidemiological studies. The five different levels allow comparisons to be made at various levels according to the purpose of the study. 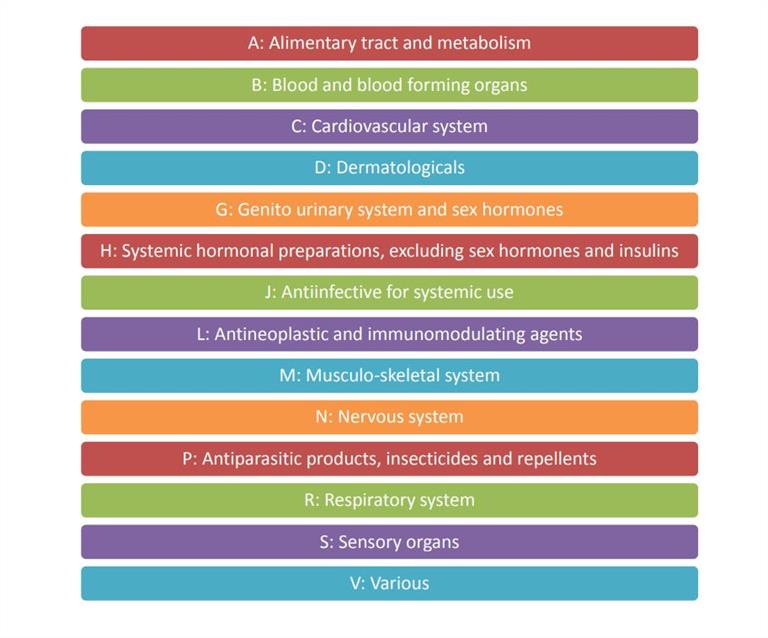 Medicinal substances are classified according to their main therapeutic use on the basic principle of only one ATC code for each medicinal product (as defined by route of administration and in some cases strength).

In many ATC main groups, pharmacological groups have been assigned on the 2nd, 3rd and 4th levels allowing drugs with several therapeutic uses to be included, without specifying the main indication. For example, calcium channel blockers are classified in the pharmacological group C08 (see classification of verapamil below), which avoids specifying whether the main indication is coronary heart disease or hypertension.

Medicinal substances frequently have several ATC codes for various routes of administration with different therapeutic uses, for example products that contain prednisolone as a single ingredient have eight different ATC codes according to the indication (systemic and various local application formulations).
A few medicinal substances have different ATC codes assigned for different strengths of the pharmaceutical formulation. For example, low strength finasteride tablets used for treatment of baldness are classified under D11AX Other dermatologicals and the high strength tablets used for benign prostatic hyperplasia (BPH) are classified under G04C Drugs used in BPH.

The challenge occurs when a medicinal product (same strength and route of administration) is approved and used for two or more equally important indications, and the main therapeutic use differs from one country to another. This will often give several classification alternatives and the main indication is decided by the WHO International Working Group for Drug Statistics Methodology on the basis of available literature and a qualified assumption of the most prevalent indication worldwide. Such drugs are usually only given one code and this may be a problem for users in countries where other uses are predominant.

Medicinal products containing two or more active ingredients are regarded as combinations in the ATC classification system and given different ATC codes from the product with a single component (one active ingredient).

Thus, in the ATC system all plain metformin preparations are given the code A10BA02.

Inclusion and exclusion criteria
The WHO Collaborating Centre in Oslo establishes new entries in the ATC classification on requests from the users of the system.  These include manufacturers, regulatory agencies and researchers.  The coverage of the system is not comprehensive.  A major reason why a substance is not included is that no request has been received.

Substances which fulfil one of the following criteria will normally be included in the ATC system:

Therapeutic use or pharmacological class
Medicinal products are classified according to the main therapeutic use of the main active ingredient. The ATC system is, however, not strictly a therapeutic classification system.  In many ATC main groups, pharmacological groups have been assigned on the 2nd, 3rd and 4th levels allowing drugs with several therapeutic uses to be included without specifying the main indication.  For example, calcium channel blockers are classified in the pharmacological group C08 Calcium channel blockers, which avoids specifying whether the main indication is coronary heart disease or hypertension.  Subdivision on the mechanism of action will, however, often be rather broad (e.g. antidepressants), since a too detailed classification according to mode of action often will result in having one substance per subgroup which as far as possible is avoided.  Some ATC groups are subdivided in both chemical and pharmacological groups (e.g. ATC group J05A – Direct acting antivirals).  Preference will be given to establishing a new pharmacological 4th level rather than a chemical subgroup.

Many medicines are used and approved for two or more indications, while normally only one ATC code will be assigned.  Besides, ATC codes are often assigned according to the mechanism of action rather than therapy. An ATC group may therefore include medicines with many different indications, and drugs with similar therapeutic use may be classified in different groups.

Only one ATC code for each route of administration
Medicinal substances are classified according to the main therapeutic use or pharmacological class on the basic principle of only one ATC code for each route of administration (e.g. oral formulations with similar ingredients and strength will have the same ATC code).  This is an important principle for ATC classification as it allows aggregation of data in drug utilization monitoring and research without counting a pharmaceutical product more than once.  This principle is strictly handled by the WHO Centre so that users in different countries shall be able to classify a pharmaceutical product (defined by active ingredient/s, route of administration and strength) in the same way.

A pharmaceutical product may be approved for two or more equally important indications, and the main therapeutic use may differ from one country to another.  This will often give several classification alternatives.  Such drugs are only given one code, the main indication being decided on the basis of the available information.  Problems are discussed in the WHO International Working Group for Drug Statistics Methodology where the final classification is decided.  Cross-references will be given in the guidelines to indicate the various uses of such drugs.

New ATC groups and “other” groups (X groups)
A new medicinal substance not clearly belonging to any existing ATC 4th level will as a main rule be placed in an X group (“other” group) in the relevant 3rd level.  To avoid a situation of several 4th levels with only one single substance in each, new specific 4th levels are as a general rule only established when at least two substances with marketing authorisations fit in the group.  In addition, a new 4th level should be regarded a benefit for drug utilization research.  New and innovative pharmaceutical products will therefore often be classified in an X group and such groups could be established for only one single substance.

Other general principles
Immediate and slow release tablets will normally have the same ATC code.

Different stereoisomeric forms will normally have separate ATC codes.  Exceptions will be described in the guidelines for the respective ATC groups

Prodrugs are usually assigned separate ATC codes if the dosages used are different and/or the nonproprietary name (INN) of the prodrug and the active drugs are different.

Obsolete drugs or drugs withdrawn from the market are kept in the ATC system, since exclusion of substances from the ATC system may create difficulties for the users of the system when considering historical data.

The classification of combination products is a challenge in any classification system. As for plain products, combinations are in general classified according to their main therapeutic use or pharmacological class. A medicinal product containing an analgesic and a tranquillizer, and used primarily to ease pain, should be classified as an analgesic.  Likewise, combinations of analgesics and antispasmodics will be classified in A03 Drugs for functional gastrointestinal disorders if the antispasmodic effect of the product is considered most important.  Similar examples are described in detail in the guidelines for the relevant drug groups.

The names of all active ingredients of a combination are given in some ATC 5th levels. This principle has been used more frequently in recent years in order to give a better identification of the various combinations.

Some combination products containing psycholeptic drugs, which are not classified under  N05 – Psycholeptics or N06 – Psychoanaleptics, are classified at separate 5th levels using the 70-series, e.g. N02BE71 paracetamol, combinations with psycholeptics.

Most of the ATC 70-serie codes were established many years ago and the products included in these codes may be obsolete today.

Combinations containing two or more active ingredients belonging to the same 4th level are in some cases classified using the 5th level code 30 (or 20).  Further explanation is given in the relevant chapters of the guidelines.  Only a few new codes have been established according to this principle in recent years.

An important principle used more frequently in recent years as more rational combinations have been marketed, is to assign separate ATC 3rd or 4th levels for combinations.

In these ATC groups for combinations, the ATC 5th level code often specify the active ingredients (e.g. C10BX04 simvastatin, acetylsalicylic acid and ramipril).  How specific and “visible” a combination appears in the ATC classification, will to some extent depend on the need for a detailed classification from a drug utilization point of view.

There are some exceptions to these main principles and these are explained in the guidelines.

Disclaimer: The presented matter is compilation of various online materials available on the topic with modification and simplification. The content is presented here for student’s easy accessibility as online study material and not for commercial purpose. Plagiarism is not removed.