These are primarily used to determine prevalence. Prevalence equals the number of cases in a population at a given point in time. All the measurements on each person are made at one point in time. Prevalence is vitally important to the clinician because it influences considerably the likelihood of any particular diagnosis and the predictive value of any investigation. For example, knowing that ascending cholangitis in children is very rare enables the clinician to look for other causes of abdominal pain in this patient population.

Cross sectional studies are also used to infer causation. At one point in time the subjects are assessed to determine whether they were exposed to the relevant agent and whether they have the outcome of interest. Some of the subjects will not have been exposed nor have the outcome of interest. This clearly distinguishes this type of study from the other observational studies (cohort and case controlled) where reference to either exposure and/or outcome is made. The advantage of such studies is that subjects are neither deliberately exposed, treated, or not treated and hence there are seldom ethical difficulties. Only one group is used, data are collected only once and multiple outcomes can be studied; thus this type of study is relatively cheap.

Many cross sectional studies are done using questionnaires. Alternatively each of the subjects may be interviewed.  Any study with a low response rate can be criticised because  it can miss significant differences in the responders and non-responders. At its most extreme all the non-responders could be dead! Strenuous efforts must be made to maximise the numbers who do respond. The use of volunteers is also problematic because they too are unlikely to be representative of the general population. A good way to produce a valid sample would be to randomly select people from the electoral role and invite them to complete a questionnaire. In this way the response rate is known and non-responders can be identified.

However, the electoral role itself is not an entirely accurate reflection of the general population. A census is another example of a cross sectional study. Market research organisations often use cross sectional studies (for example, opinion polls). This entails a system of quotas to ensure the sample is representative of the age, sex,
and social class structure of the population being studied. However, to be commercially viable they are convenience samples—only people available can be questioned. This technique is insufficiently rigorous to be used for medical research.

How to run a cross sectional study 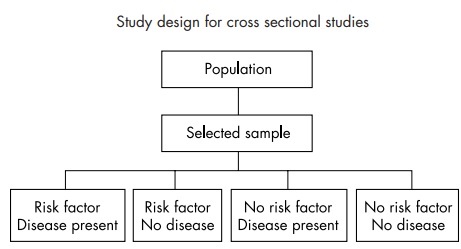 The most important advantage of cross sectional studies is that in general they are quick and cheap. As there is no follow up, less resources are required to run the study.
Cross sectional studies are the best way to determine prevalence and are useful at identifying associations that can then be more rigorously studied using a cohort study or randomised controlled study.

The most important problem with this type of study is differentiating cause and effect from simple association. For example, a study finding an association between low CD4
counts and HIV infection does not demonstrate whether HIV infection lowers CD4 levels or low CD4 levels predispose to HIV infection. Moreover, male homosexuality is associated with both but causes neither. (Another example of a confounding variable).

Often there are a number of plausible explanations. For example, if a study shows a negative relation between height and age it could be concluded that people lose height as they get older, younger generations are getting taller, or that tall people have a reduced life expectancy when compared with short people. Cross sectional studies do not provide an explanation for their findings.

Rare conditions cannot efficiently be studied using cross sectional studies because even in large samples there may be no one with the disease. In this situation it is better to study a cross sectional sample of patients who already have the disease (a case series). In this way it was found in 1983 that of 1000 patients with AIDS, 727 were homosexual or bisexual men and 236 were intrvenous drug abusers.

The conclusion  that individuals in these two groups had a higher relative risk was inescapable. The natural history of HIV infection was then studied using cohort studies and efficacy of treatments via case controlled studies and randomised clinical trials