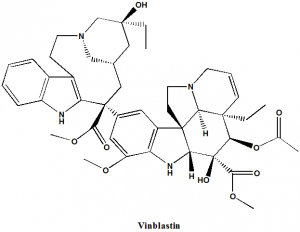 Vinblastine falls under the category of Vinca alkaloids cytotoxic drugs.

i. The primary activity of this drug is through inhibition of the mitosis at the metaphase stage of the cell by interaction with the tubuline protein.

iii. This results in the mitotic arrest and cell death. [1]

i. Alkaloids present in the Catharanthus roseus plant are extracted and separated into alkaloid tartrate with the help of benzene.

ii. Vinblastine is separated through the process of chromatography on aluminium oxide deactivated with acetic acid.

ii. Lactone in deprotonated and isothiocynate is added to give thioanilide.

iii. This do radical mediated cyclisation onto the styrene to give indole.

iv. The indole is chlorinated with t-BuOCl to produce a reactive intermediate.

v. The intermediate so formed is coupled with the Vindoline to produce Vinblastine.

Q.1  Cytoblastin is the term related with which drug?

Q.2 Predict the incorrect statement related to the therapeutic uses of drug Vinblastin-

b) It is used to cure the bone marrow depression effects

c) It is used for the treatment of Kaposi’s sarcoma

d) Fibromatosis can also be treated with help of this drug

Q.3 Match the following with respect to the SAR of drug Vinblastine

Q.4 Which amongst the following drugs shows its effect through interaction with tubuline proteins?

Q.6 Which of the following is not a side effect of Vinblastine?

b) Muscle and joint pain