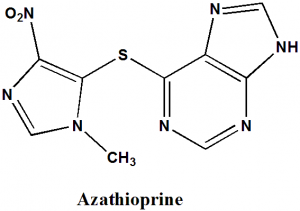 Azathioprine falls under the category of purine antagonist antimetabolite. It is also an immunosuppressive agent.

i. Azathioprine inhibits the synthesis of purine in the cell.

ii. This will further leads to the inhibition of synthesis of DNA and RNA.

iii. Azathioprine also interacts with cellular metabolism and results in the inhibition of mitosis. [1]

i. Methanamine is reacted with diethyl oxalate in the presence of ethylhydroxide at room temperature to form N,N’- dimethyloxalamide.

ii. N,N’-dimethyloxalamide is then treated with PCl5 to give 5-chloro-1-methyl-1H-imidazol.

iv. It is then treated with 9H-purine-8-thiol to finally produce Azathioprine.

It is given for the Treatment of

Q.1 What can be the correct IUPAC nomenclature of the drug Azathioprine

Q.2 Which amongst the following statements is/are INCORRECT related to the SAR of Azathioprine?

I. Activity of the drug increases with decrease in the carbon chain length.

II. Substitution at the 2nd position can increase the activity of the drug irrespective to the type of substituent.

III. Introduction of the lipophillic group at the 6th position will increase the activity of the drug.

Q.3 The correct order for the mechanism of action of Azathioprine can be?

I. DNA and RNA synthesis are inhibited

Q.4 The drug Azathioprine is mainly used for?

a) Treatment of skin cancers

b) As an immunosuppressant

Q.5 Match the drugs with the correct classification.

Q.6 How many statements below are true with respect to the side effects of the drug Azathioprine?

Q.7 The type of ring system found in Azathioprine is?