Etoposide falls under the category of epipodophyllo toxin cytotoxic drug. 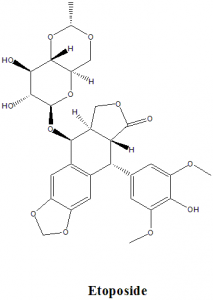 i. DNA topoisomerase is inhibited by Etoposide.

ii. Due to this, DNA re-ligation is inhibited.

iv. This leads to apoptosis of cell. [1]

ii. Compound formed is then demethylated to 1-bromo-4’-demethylepipodophyllotoxin.

iii. Bromine is replaced by hydroxy group to give 4’-demethylepipodophyllotoxin.

vi. Protecting groups from the 4’-hydroxy group is removed by hydrogenolysis

viii. The cyclic O-4,6 acetal is formed by reaction with acetaldehyde dimethyl acetal [3]

Etoposide is used for the treatments of:

Q.2 How many statements below are true with respect to the SAR of the drug etoposide?

Q.3 The drug Etoposide is found in which form when treated with methanol?

Q.4 The incorrect with respect to the method of synthesis of the drug Etoposide is?

d) All the above statements are true

Q.5 Which amongst the following is not a therapeutic use of drug Etoposide?

Q.6 The correct classification of the drug Etoposide can be?

Q.7 How many number of rings are found in the chemical structure of the drug etoposide?