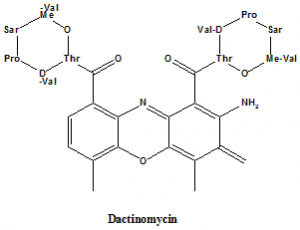 Actinomycin D falls under the category of Antibiotic cytotoxic drug. [1]

i. Dactinomycin binds with DNA.

i. Dactinomycn is synthesized during the culture of Streptomyces antibioticus.

ii. It is purified with the help of chromatographic and crystallization methods.

iii. The catalytic hydrogenation of the above compound gave O- (L-N-methylvalyl)-N-t-butyloxycarbonyl-L-threonine.

vi. It was purified with counter current distribution method.

vii. The above formed compound was then treated with 0.4M solution of boron trifloride in glacial acetic acid to give chromatographically uniform yield.

ix. Product was then treated with di-p-nitrophenyl sulfite in pyridine to give nitrophenyl ester.

x. Benzoylcarbonyl group was removed by treatment with -5 N hydrogen bromide in dioxane.

xi. Purification of the product through column chromatography on Sephadex LH-20 in methanol will give cyclic pentapeptide lactone derivative.

xii. Catalytic hydrogenation followed by oxidation with potassium ferricyanite in methanol-phosphate buffer will give actinomycin D. [4]

Dactinomycin is used for the treatment of :

Q.1  The term ‘DACMOZEN’ is associated with which drug?

a) It is used for Wilms’ tumor

b) It is used for Hodgkin’s myloma

c) It is used for Osteosarcoma

d) It is used for Ewing’s sarcoma

Q.3 Match the following with respect to the SAR of drug Dactinomycin-

Q.4 Which amongst the following drugs shows its effect through Binding with DNA and inhibition of RNA synthesis?

Q.6 Which of the following is not a side effect of Actinomycin D?

Q.7 Phenoxazone ring structure is present in which drug?