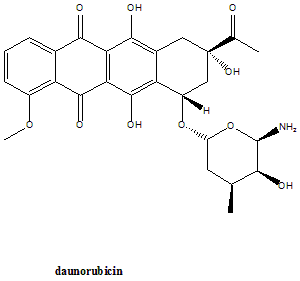 Duanorubicin falls under the category of Anthracyclic antibiotic cytotoxic drug. [1]

i. Duanorubicin forms complexes with DNA by intercalation between base pairs.

iii. Relegation of the DNA is prevented.

i. N-trifloroacetylduanosamine was obtained from duanosamine hydrochloride by ethyl acetate.

ii. The 1,4-bis(o-p—nitro-benzoate was obtained from ether acetone and suspended in CH2Cl2 at freezing temperature.

iii. It was saturated with Anhydrous HBr to give clear solution.

iv. P-nitrobenzoic acid was precipitated from the above clear solution.

vi. When the product was identified from silica gel in ethyl acetate-benzene-methanol, the impurities were separated through column chromatography. 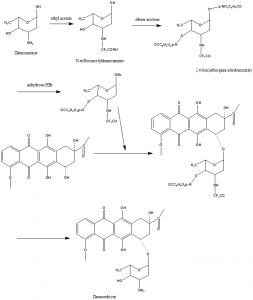 Doxorubicin is used for the treatment of :

Q.1 Match the following with correct Trade names of the drugs-

Q.2 How many statements below are true with respect to the SAR of the drug Daunorubicin?

Q.3 The drug Daunorubicin  is found in which form?

Q.4 The correct statement/s with respect to the method of synthesis of the drug Daunorubicin is/are?

a) Daunorubicin is obtained from cultures of Streptomyces peucetius

b) Daunorubicin is obtained from cultures of Streptomyces caeruleorubidus

Q.5 Which amongst the following is not a therapeutic use of drug Daunorubicin?

Q.6 The correct classification of the drug Daunorubicin can be?

Q.7 How many number of rings are found in the chemical structure of the drug Daubnorubicin?