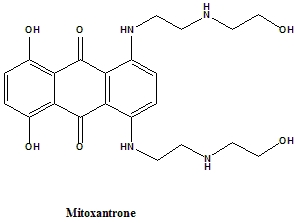 Mitoxantron falls under the category of antibiotic Antineoplastic cytotoxic drug. [1]

I. Drug intercalates with DNA by forming hydrogen bonds with the DNA. It then causes cross-linkages in the DNA and thus, causes strand breaks.

II. It interferes with topoisomerase II, which results in prevention of the repairing and recoiling of the damaged DNA strands.[2]

ii. The above compound formed is treated with 2-(2-aminoethylamino)ethanol followed by oxidation to give mitoxantron. 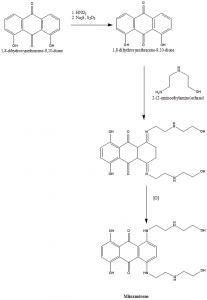 Mitoxantrone is used for the treatment of:

Q.1 Which term is NOT associated with the drug Mitoxantron?

Q.3 The drug Mitoxantron shows its action through

b) Cross-linkgae formation between DNA strands

Q.4 The correct order for the synthesis of the drug Mitoxantrone is

I. Treatment with sodium sulfide

Q.5 Predict the incorrect statements from the following with respect to the classification of the drug.

I. Prednisolone belongs to glucocorticoids.

b) All of the statements are incorrect.

Q.6 The correct sequence of True and False for the given statements with respect to the side effects of drug Mitoxantron is?

I. Low blood counts is common side effect of drug.

II. Arrhythmia is not a side effect of the drug.

III. Hair loss may occur in the patient taking the drug.