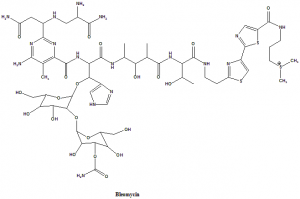 Bleomycin falls under the category of antibiotic Antineoplastic cytotoxic drug. [1]

ii. The pseudoenzymes so formed reacts with Oxygen to produce hydroxide and superoxides free radicals.

iii. Cleaving of DNA by the free radicals.[2]

ii. Methyl ester of the above formed compound was treated with MeOH-HCl.

iii. It is then treated with Tert-butyl S-(4,6-dimethylpyrimidine-2-yl)thiocarbonate.

iv. Formed compound will be treated with tosylchloride-Na2CO3 in dioxane water to give tosyl derivative.

v. The compound will be then treated with alpha-bromide of peracetyl in CH2Cl2.

vi. All the protective groups except the Boc-group will be removed by mild alkaline treatemnet.

vii. Then the compound will be treated with DNFB to give N-DNP derivative, then purified using chromatography technique.

ix. The formed compound is then purified using chromatography technique to get the yield of 83%.

x. All the protective groups are removed by using 0.1N NaOH to get the Bleomycin.[3]

Bleomycins are used for the treatment of:

Q.1 The term ‘Blenoxan’ is associated with which drug?

Q.2 Disaccharide moiety in drug Bleomycin is responsible for?

Q.3 Which amongst the following are the correct side effects of the drug Bleomycin?

Q.4 The microbes required for the synthesis of drug Bleomycin is?

Q.5 Which pairs of drug and its classification are true

Q.6 Correct physical form in which the drug Bleomycin is found?

a) Yellow to colorless powder

b) Bluish when copper concentration is present

Q.7 Match the following with respect to ring systems of the drug