2.) It is a secondary immunodeficiency disease as it arises due to the acquired suppression of immune system.

3.) AIDS is a pandemic in distribution and is seen in all continents.

2.) There are four members of human retroviruses into two groups :-

4.) It contain a chore having a chore protein, chiefly P24 and P18, two strands of genomic RNA and the enzyme reverse transcriptase.

5.)The core is covered by a double layer of lipid membrane. The membrane is studded with two envelope glycoprotein, gP120 and gP41.

6.) Besides other genes, three important gene code of the respective component of viron:

2.) Transmission via blood and blood products.

3.) Perinatal transmission as infection can occur from infected mother to the newborn during pregnancy transplacentally.

5.) Transmission by other body fluids.

The pathogensis of HIV infection is largely related to the depletion of CD4+ T- cells (helper T-cells) resulting in profound immunos upperession. After getting into the body of the person, the virus enter into the macrophages where RNA genome of the virus replicates to form viral DNA with the help of an enzyme reverse transcriptase. The viral DNA gets incorporated into the host cell’s DNA and directs the infected cell to produce virus particles. The macrophages continue to produce viruses and in this way it acts like a HIV factory. Simultaneously, HIV enters into upper T-lymphocyte replicates and produce progeny viruses. The progeny viruses released in the blood attack other helper T – lymphocytes. This is repeatedly leading to a progressive decrease in the number helper T-lymphocytes in the body of the infected person. During this period, the person suffers from bouts of fever, diarrhea and weight loss. 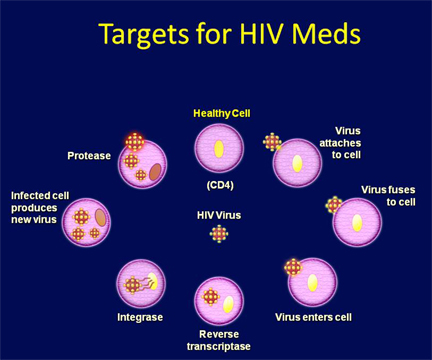 1.) As AIDS has no cure, prevention is best option.

2.) In our country the National AIDS Control Organization (NACO) and other non – governmental organizations ( NGOs) are doing a lot to educate the people about AIDS.

4.) Ensuring the use of only disposable needles and syringes in public and private hospitals and clinics.

5.) Free distribution of condoms, controlling drug abuse, advocating safe sex and promoting regular check – ups for HIV in susceptible population, are some such steps taken up.

Ques:1) When was HIV first recognized in U.S. ?

Ques:2.) Which of these is a symptom of HIV infection ?

d.) All of the above

Ques:3) A person has AIDS when which of these occurs ?

a.) HIV antibodies are found in blood

b.) Exposure to HIV

c.) The CD4+ count is lower than 200 or opportunistic infection develops in the HIV infected person

Ques:4) What does HIV – Positive means ?

a.) Either antibodies against the HIV or the virus particles themselves are found in blood

b.) You have been tested for HIV

c.) Your WBC count is high

d.) You have been informed about HIV

Ques:5) HIV attack a specific kind of cell in the immune system. Which is it ?

Ques:6) What is the CD4+ T- cells count at which AIDS is considered to have developed ?

Ques:7) The risk of HIV/AIDS is tied to behaviors. Which of this behavior can put you at risk ?

a.) Spending time with someone who has AIDS

b.) Not wearing latex condom during sex

Ques:8) Why is combination of medicines called a cocktail – used to treat HIV ?

a.) The virus changes (mutates) rapidly

b.) Each person responds to each medicine differently

Ques:9) What is the best way to protect yourself against HIV ?

a.) Get yourself vaccinated for HIV

b.) Use birth control pills

c.) Use of latex condom during sexual intercourse

Sol.3] (c) The CD4+ count is lower than 200 or opportunistic infection develops in a HIV – Infected person.

Sol.4] (a) Either antibodies against HIV or the virus.

Sol.9] (c) Use of latex condom during sexual intercourse.

1.) Textbook of pathology by Harsh Mohan.