CULTIVATION AND GROWTH OF BACTERIA

The lag phase: During the lag phase, the microorganisms do not multiple but they try to settle in the environment. They synthesize enzymes, DNA and proteins and stored energy in the form of ATP. It may take from an hour to few days for the microbes, depending upon the type of media used; to settle with the new environment.

The log phase: During this period, organisms divide rapidly, showing exponential or logarithmic growth. During each division, the microbial population doubles their number. According to this, the bacterial colonies should show synchronous growth forming stair like graph patter for their growth. But instead, they show non-synchronous growth, in which the whole colony do not divide all together at the same time, but between a certain time interval. Some bacteria require 20 minutes to divide ones while others may take upto 20 hours for one division. The non-synchronous growth shows smooth curve on the growth-time graph.

The stationary phase: As the bacterial colonies keep on dividing, the source of nutrition remains limited and after certain duration, the rate of generation of new cells becomes equal to rate of death of cells. Thus the total number of microbes during the stationary phase remains almost constant.

The decline phase:  When the sources are near to exhaust, the rate of death becomes more due to unfavorable environment for the division of cells. The number of live cell decreases during this phase. Bacteria which can form spores, starts forming more spores due to unfavorable conditions, because spores have greater tendency to survive these harsh conditions. 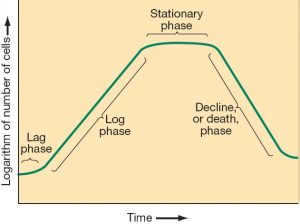 the above image is taken for educational purpose only from Microbiology Principles and Explorations by J.G. Black

Cultivation of anaerobic bacteria requires anaerobic conditions. These conditions can be provided by the following methods:

Brewer jar method: Air containing oxygen is evacuated out and replaced by mixture of hydrogen and nitrogen gases. The lid of jar is sealed by using platinum catalyst which convert any remaining oxygen into water.

GasPak system: Hydrogen and carbondioxide gas is filed in the jar. Oxygen reacts with hydrogen to form water and anaerobic condition can be obtained.

Chromium sulfuric acid method: Sulfuric acid is reacted with chromium to produce hydrogen gas which is then passed to the jar containing oxygen. Hydrogen and oxygen combines together to form water and thus, oxygen gas is removed.

Shake-culture technique: Loopful of organism is transferred to molten agar media and then it is shake and cool rapidly. Anaerobic bacteria show growth at the bottom of the test tube.

Pyrolgallic acid technique: pyrogallic acid crystals and sodium hydroxide is put on the cotton plug just above the agar slants. Chemical absorbs all the oxygen and anaerobic conditions can be maintained.

Paraffin plug technique: Any medium of reducing substances is heated rapidly to remove the oxygen from it completely and then it is cooled. The medium is sealed quickly by using paraffin wax.

1. The phase of bacterial growth during which bacteria shows Exponential  growth curve is called?

2. The rate of generation of new bacterial cell become equal to the death rate during which phase?

3. During the lag phase?

a. Microorganisms try to settle in the new environment

c. Death rate is equal to the rate of generation of new cell

4. During the decline phase?

a. Microorganisms try to settle in the new environment

c. Death rate is equal to the rate of generation of new cell

5. Fluid Thioglycollate medium is used for the cultivation of?

6. In the Brewer jar method?

a. Air containing oxygen is evacuated out and replaced by mixture of hydrogen and nitrogen gases.

b. Hydrogen and carbondioxide gas is filed in the jar.

c. Loopful of organism is transferred to molten agar media and then it is shake and cool rapidly.

d. Any medium of reducing substances is heated rapidly to remove the oxygen from it completely and then it is cooled.

7. If different test tubes are filled with nutrient broth and inoculated with different types of microorganisms, the match the following bacteria with the location in the test tube where they will show growth.