Exchange of oxygen and carbon dioxide in External and Internal Respiration; MCQ With Answer

The exchange of oxygen and carbon dioxide between alveolar ducts and pulmonary capillaries occurs through passive diffusion which in relation with the two laws, the Dalton’s law and Henry’s law. 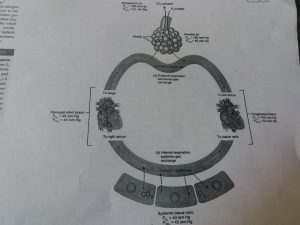 As seen in the above mentioned diagram , the oxygen is inhaled , reaches the alveoli and from alveoli it reaches the left atrium because the partial pressure of oxygen in alveoli is 105 mm Hg and in left atrium it is 100 mm Hg and in respect to the Dalton’s law gases diffuse from area of high partial pressure to the lower area, again during internal respiration the oxygen moves from blood in systemic capillaries to the cells and tissues where in the partial pressure is 100 mm Hg in left atrium and 40 mmHg in cells. In the same way movement of carbon dioxide also takes place but in opposite direction.

Factors affecting the rate of exchange of gases:-