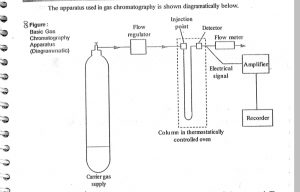 columns can be classfied

• Burning of compounds in a flame will lead to ion poduction which are collected at opposite electrodes → current produced is directly proportional to concentration of solute.

• Burning H2 is provided as fuel which is supported by air in the form of pure oxygen.

1. Which of the following is not a feature of carrier gas used in gas chromatography?
a) It must be chemically inert
b) It should be suitable for the detector employed
c) It should not be completely pure :
d) It should be cheap

2. In which of the following methods are liquid samples injected into the column in gas chromatography?
a) Gas tight syringe
b) Micro-syringe:
c) Rotary sample valve
d) Solid injection syringes

3. Which of the following is the commonly used support material for the packed column in gas chromatography?
a) Glass
b) Metal
c) Diatomaceous earth:
d) Stainless steel

4. Which of the following is the disadvantage of coiled or helical shaped packed chromatographic column?
a) It cannot be packed uniformly
b) It cannot be repacked easily:
c) It is not compact
d) It is not easy to heat it evenly

5. Which detector is not used in GC ?

6.which is not application of GC chromatography?

c.ASSAY of drugs – purity of a compound can be determined for drugs like :-ATROPINE SULPHATE

d. It is purified water.