Instrumentation of Fluorimetry and MCQ Asked in Previous Exams

In Fluorimetry there are mainly three types of lamps are used

At low pressure Mercury vapour give addition line at 254 nm is used as source in filter type of Fluorimetry.

B. Xenon arc lamp :- It give a more intensity radiation when compared to Mercury lamp.

In Fluorimetry there are mainly two filter are present

1. Excitation monochromator :– provide a suitable radiation for excited of molecule.

2. Emission monochromator :– Isolates only the radiation emitted by the flourescent molecule.

3. Sample cell : sample cell are cylindrical or quadrangular shape. The cell are made up of colour corrected fused glass and pathlength is normally 10 mm or 1 cm.

Photo multiplier tubes are the best and accurate. 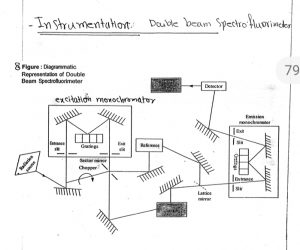 1. When molecules are excited in visible region which lamp is used ?

2. Which filter are absorbed UV radiation and transmit visible radiation ?

3. Which filter are absorbed visible radiation and transmit UV radiation ?

6. How many mm path length is sample cell ?

7. During first rotation of chopper radiation beam is transmit through ?

8. During second rotation of chopper radiation beam is transmit through ?

9. Which detector are used in Fluorimetry?.

10. Which are the varient of Fluorimetry instrument ?

Reference: book of pharmaceutical analysis of the third edition of the Dr. S. Ravisankar