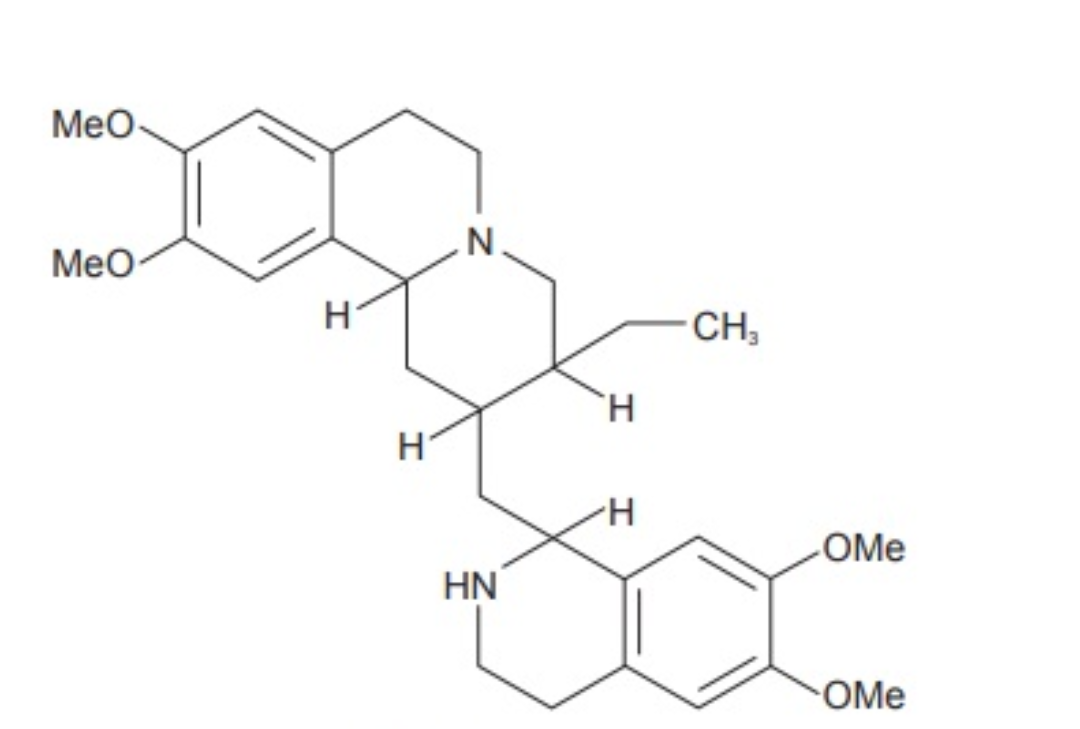 • The rhizome of ipecac is horizontal, thin or sometimes thick and annulated.
• The size is 5-15 cm long and 6 mm in diameter and usually smaller.
• The shape is cylindrical or slightly tortuous.
• The external surface of rhizome is broadly annulated and color is brick red to brown.
• It contain ridges which are rounded and encircle the root.
• The bark is grayish in color , thick and small dense wood.
• Taste is bitter and odour is slight.
• It is a shrub having 20-40 cm height.
• Roots are more or less annulated externally, and some portion of the rhizomes are attached to it and also some roots are non-annulated and portion of rhizomes are not attached to it.
• Rhizome have a thinner bark and a definite pith.

• 2-3% of total alkaloids is present in the root of ipecac.
• The other chemical constituents are emetine, cephaeline ,psychotrine and psychotrine methyl ether.
• In the chemical structure of all the alkaloids ,an isoquinoline ring system is present and it is present in the bark of it.
• Emetine which is active chemical constituent of ipecac ,does not contain a free phenolic group ,thus it is known as nonphenolic alkaloid.
• The base of emetine is noncrystalline but its salts are crystalline.
• The other species of ipecac, rio ipecac contain more than 2% alkaloids in which emetine have two-third part and cephaeline is one-third part.
• Other chemical constituent such as monoterpenoid isoquinoline glucosides including ipecoside, alangiside are also present.
• The iridoid glucosides sweroside and 7- dehydraloganin together with starch and calcium oxalate is also present in the root.

• Ipecac work as an expectorant.
• It is also used as diaphoretic.
• It is used to treat amoebic dysentery.
• It have local irritant action.
• Ipecac has the property of emetic.
• In chemical constituent of ipecac, emetine has expectorant action more than emetic action and cephaeline has more emetic action.
• Psychotrine and its o-methyl ether which is the chemical constituent of ipecac work as selective inhibitors of human immunodeficiency virus.

• Aerial stem of the plant is the major adulterant of the drug.
• It is separated from the root of the plant by the longitudinal striation.

5. The chemical constituents of ipecac are
(a) Emetine
(b) Cephaeline
(c) Psychotrine
(d) All of the above

6. What are the characteristics of the rhizome of the ipecac?
(a) It is thin or thick sometimes.
(b) It is annulated.
(c) The shape is cylindrical.
(d) All of the above

7. Which is not the chemical constituent of ipecac shrub?
(a) Emetine
(b) strychnine
(c) Brucine
(d) Both b and c

8. What is the common adulterant of ipecac?
(a) Strychnine
(b) Ephedra
(c) Aerial stem of the ipecac
(d) Vincristine

9. Ipeca is not used as
(a) Antibacterial
(b) Expectorant
(c) Emetic
(d) Local irritant