Mass spectroscopy is significantly depends upon the ionization method. Ionization can be categorized into two part

B. Desorption ionization by particle/radiation

CALIFORNIUM FISSION IONISATION :- Ionisation as a result of impact with fission fragments from 252Cf.

Di(desorption ionisation):- This is a general term encompassing all form of direct ionisation from a solid or liquid sample.

ESI(ELECTROSPRAY IONISATION):- Ionisation produced by spraying a sample solution through a conducting capillary tube at a high potential.

EI(ELECTRON IONISATION):- Ionisation in the gas phase by interaction with a beam of electrons.

FAB (FAST ATOM BOMBARDMENTS):- Ionisation by impact of a beam of energetic atoms and/or ions from an ion gun into a liquid matrix and the subsequent transfer of energy from the matrix to the analyte.

MALDI (MATRIX ASSISTED LASER IONISATION):- Ionisation by effect illumination with a beam of laser generated light into a matrix containing a small proportion of analyte.

SOFT IONISATION :- methodes leading to the formation of ions with low internal energies.

TI(THERMAL IONISATION):- Ionisation induced at high temp. in a gaseous sample with a microwave or an inductively coupled plasma.

TSP (THERMOSPRAY IONISATION):- IONISATION FROM A SOLUTION OF ANALYTE BY PASSING THROUGH A HEATED TUBE.

2.Detection of impurities :– Impurities present can be detected by the additional peaks, highest value of mass peak than compound itself and from the fragmentation pattern.

3. Quantitaive analysis :– The intensity of peak correspond to the proportion of fragments. By comparing with standard drug the quantity of sample can be estimated.

4.Drug metabolism studies :- By recording the mass spectrum of metabolite and that of pure drug the metabolism of the drug can be known.

5.Clinical,toxicological and forensic application :– Very minute quantites of the drug can be used to find out mass and hence the substance can be identified from the mass spectral pattern.

The loss of an alkene fragment by cyclic rearrangements of a carbonyl compound unsaturated compound with γ-hydrogens under go mc-lafferty rearrangements.

Fragmentation take place only at γ-hydrogen

bond break down between α and β carbon resulting in liberation. 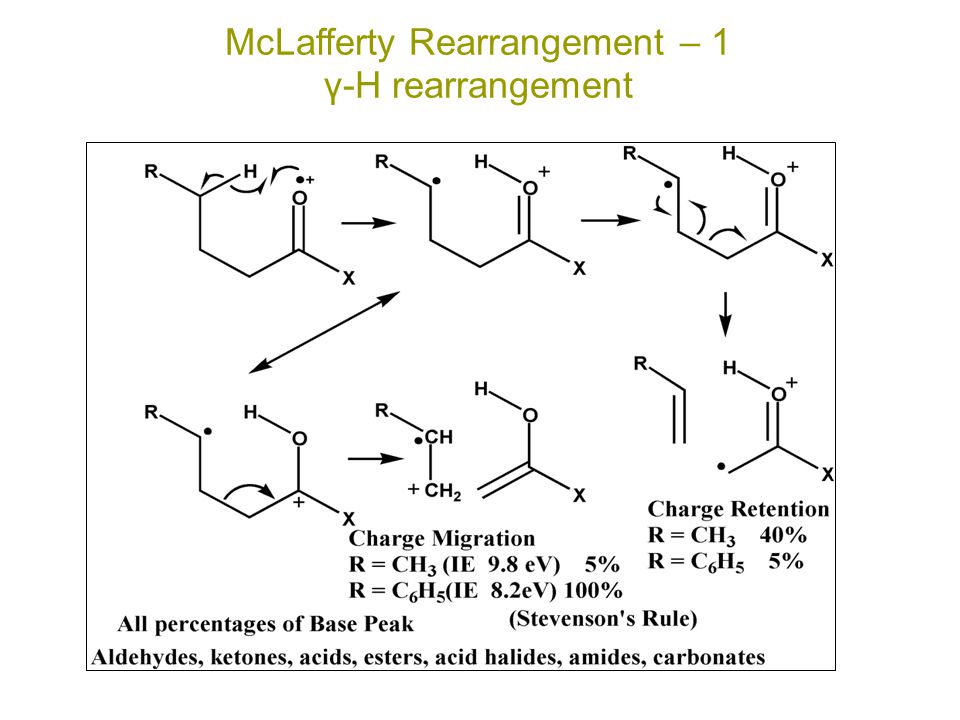 2.which ionization technique is not used for a  VOLATILE compound ?

3.How many mg sample is required for FAB methode ?

4.MALDI is methode of which spectroscopy ?

5.Which is sample destructive technique ?

6. in which technique heated tube are used for ionization of sample?