Equivalent diameter: Stokes’ diameter; frictional drag diameter—a sphere having an equivalent drag force to a particle of the same diameter in the same fluid at the same velocity.

1.      Allow a homogeneous suspension to settle in a cylinder, take samples from the settling suspension at a fixed horizontal level at intervals of time.

2.       Each sample will contain a representative sample of the suspension, with the exception of particles greater than a critical size, all of which will have settled below the level of the sampling point.

3.      The concentration of solid in a sample taken at time t is determined.

4.       This concentration expressed as a percentage of the initial concentration gives the percentage (w/w) of particles whose falling velocities are equal to or less than x/t. Substitution in the equation above gives the corresponding Stokes’ diameter. 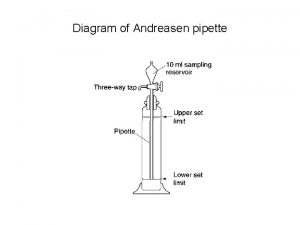 Coulter counter is a popular instrument to determine particle volume and particle size based on the conductivity measurement. It operates on the principle that when a particle suspended in a conducting liquid passes through a small orifice (opening), on either side of which are electrodes, a change in electric resistance occurs. The change in electric resistance is proportional to the volume of the particle. 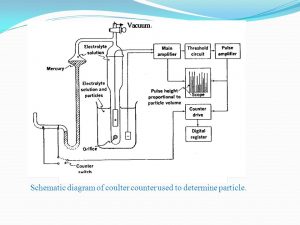 For the experiment, powder samples are suspended in the electrolyte to form a very dilute suspension. The particle concentration is arranged so that only one particle travels through the aperture. A constant voltage is applied across the electrodes so as to produce a current. As the particle passes through the aperture, it displaces its own volume of electrolyte and changes the resistance between the electrodes, which causes a pulse in the voltage. The magnitude of pulse will be proportional to the volume of the particle. The changes in voltage are amplified and impulses above a predetermined threshold value are counted, so that the recorder provides a count of the number of particles over a certain size.

1.Which of the following diameters is obtained by sedimentation technique?

2.Range of analysis by sedimentation technique is

3.Sedimentation Technique follows which of the following law?

4.Stoke’s Law is given by which of the following equation?

5.Which of the following apparatus is used in sedimentation technique?

7.Which of the following are advantages of sedimentation technique?

a)The apparatus is inexpensive and the technique is simple

8.Which of the following are disadvantages of sedimentation method?

9.Cascade impactor is used for

10.Laser diffraction is used for

11.Coulter Counter Method is used for the determination of

12.Which of the following equipment is used for determining the particle size distribution of pharmaceutical dispersions?

13.The rate of sedimentation of particles is directly proportional to

14.According to the stokes equation, the sedimentation rate is inversely proportional to

15.Which of the following are advantages of coulter counter method?

a)Results are expressed as particle volume, and hence the diameter of the sphere of equivalent volume can be easily calculated

c)Results are reliable since large numbers of particles are counted