The following are the five fundamental properties of powders from which other properties can be derived:

And the volume is given by

As the volume of a sphere is πd3/6, the diameter of a spherical particle with a volume V is given by

Nonspherical or asymmetrical particle: In naturally occurring particulate solids and milled solids, the shape of particles is irregular with different numbers of faces. An asymmetric particle has a definite surface area and volume, but its length varies with its orientation. As the degree of asymmetry increases, so does the difficulty of expressing size in terms of meaningful diameter. Hence, an asymmetric or a nonspherical particle is often considered to be approximate to a sphere that can then be characterized by determining its diameter. Because measurement is then based on a hypothetical sphere, which represents only an approximation to the true shape of the particle, the dimension is referred to as the equivalent spherical diameter of the particle. The size of the particle is expressed in terms of equivalent spherical diameters by using some measurable properties such as surface area, volume, diameter or density. Thus,

The other two diameters, the values of which are dependent on both the orientation and the shape of the particles, are Feret’s diameter and Martin’s diameter. 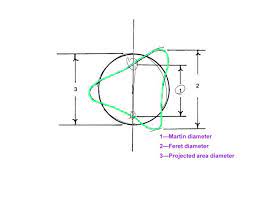 Particle size distribution: A particle population that consists of spheres or equivalent spheres with uniform dimensions is monosized and its characteristics can be described by a single diameter or an equivalent diameter. However, most pharmaceutical powders are polydisperse (i.e. consists of a mixture of particles of varying sizes and shapes). Therefore, it is necessary to know not only the size of particle in the sample but also the number of particles of each size present in the sample. This is called the particle size distribution.

1.One micrometer is equal to

2.Which of the following properties of a particle significantly affects the physical, chemical and biological properties of the drug?

3.It is difficult to express the size of particle in a meaningful diameter

4.The type of particle diameter obtained largely depends on

a)Method by which it is determined

c)Procedure by which it is calculated

d)Way it is defined and described

6.Which one of these distributions is more important in the design of dosage forms?

7.In the formulation development of emulsion and suspensions, what type of diameter is important?

8.Sieving method is used for size distribution analysis of powder. The disadvantage of this method is:

b)Attrition of powder is possible

c)Large number of sieves are required

9.While using sedimentation method for size analysis, addition of a deflocculating agent to a suspension is necessary in order to

a)Accelerate the process of sedimentation

10.Stoke’s law cannot be used, if Reynolds number is more than

12.When coulter-counter apparatus is employed for powder analysis, the following criteria is important

a)Dispersion medium should be colored

b)Dispersion medium should be conducting

c)Suspended particles should be charged

d)Suspended particles should be suspended

13.In coulter-counter, as the particles move through the orifice, the event that occurs is

a)Conductance between the electrodes increases

c)Resistance between the electrodes increases

a)Light transmission of gas that reaches the detector

b)Pressure across the compacted powder

c)Thermal conductivity of gas across the powdered pack

a)Bulk density of the granules

c)Roughness of the granule surface

d)Smoothness of the granule surface