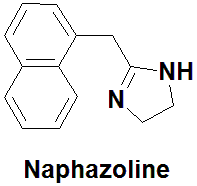 Naphazoline is a α1-adenergic agonist.

R3 substitution on the aromatic ring:

ii. The iminoester undergoes cyclization reaction when reacts with ethylinediamine to give naphazoline.

Naphazoline is used as a degongestant.

Some of the side effects of naphazoline are

Q.1 Correct statements for the Naphazoline drug are?

Q.2 Match the following of the drugs with their correct IUPAC names.

Q.3 Correct steps for the mechanism of action of the drug Naphazoline?

III. Decrease in the congestion

Q.4 Correct sequence for True/false for the classification of the drug can be?

a) Afford compounds with α-blocking activity

Q.6 The correct sequence for the steps for synthesis of drug naphazoline from (1-naphthyl)acetonitrile?

I. Reaction with ethanol

b) Decrease in blood count