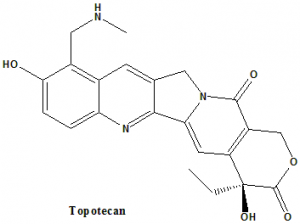 Toptecan falls under the category of camptothecin cytotoxic drug. [1]

i. During the S phase of the DNA synthesis, topotecan binds with the topoisomerase I-DNA complex. This prevents the relegation of the DNA strands. Topotecan binds at the site of the DNA cleavage by intercalating between the upstream and downstream base pairs by mimicking a DNA base pair.

ii. The ternary complex so formed interferes with the moving replication fork.

iii. The lethal double-stranded breaks in the mammalian cells cannot be repaired by the cells and thus apoptosis takes place. [2]

i. Reduction and selective oxidation of the quinoline moiety of the camptothecin.

ii. Introduction of the N,N-dimethylaminomethyl side chain. 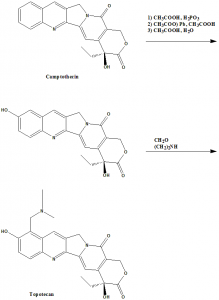 Q.1 Which term is NOT associated with the drug Topotecan?

Q.3 The drug Topotecan shows its action through-

a) Inhibiting the pyrimidine synthesis within the cell

b) Inhibiting the purine synthesis within the cell

c) Inducing radiosensitization in the cells

Q.4 The correct order for the synthesis of the drug Topotecan can be

I. Selective oxidation of the quinoline moiety.

II. Extraction of camptothecin from its natural source

III. Extraction of Epipodophyllotoxin from its natural source

IV. Introduction of N,N-dimethylaminomethyl side chain

Q.5 Predict the incorrect statements from the following with respect to the classification of the drugs.

a) All of the above

Q.6 The correct sequence of True and False for the given statements with respect to the side effects of drug Topotecan is-

I. RBC and WBC counts may increase

III. Hair loss is a common side effect of this drug

IV. Fatigue and fever may occur in the patient taking topotecan drug.