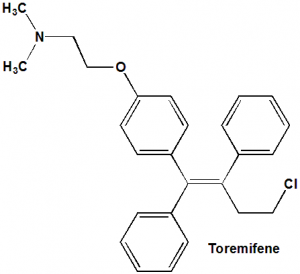 ii. The latter compound is then reacted with THPOC6H4MgBr, and thereafter it is reduced.

iii. In the next step, the formed compound is reacted with 2-chloro-N,N-dimethylethanamine. 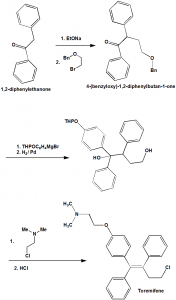 The drug used for the treatment of metastatic breast cancer in the female patients who are postmenopausal and the tumors are estrogen receptor positive.

Q.1 Which term is associated with the drug Toremifene?

Q.2 Match the following with respect to the approximate molecular weights of drugs

Q.3 The drug Toremifene  shows its action through

a) Binds with estrogen receptors and shows estrogenic properties

b) Binds with estrogen receptors and shows antiestrogenic properties

c) Binds with estrogen receptor and shows either estrogenic, antiestrogenic or both the properties.

Q.4 The correct order for the synthesis of the drug Toremifene is?

II. Reaction with THPOC6H4MgBr and reduction.

Q.5 Predict the incorrect statements from the following with respect to the classification of the drugs-

I. Prednisolone is a glucocorticoid.

II. Fosfestrol is a selective estrogen down regulator.

IV. Nafarelin is a GnRH analogue.

Q.6 The correct sequence of True and False for the given statements with respect to the side effects of drug Tornifene is?

I. Vaginal discharge is a common side effect.

II. Depression is a less common side effect.

III. Increase in appetite may occur in patients taking the drug.

IV. Insomia is a less common side effect.

Q.7 Which amongst the following drugs has the highest melting point?