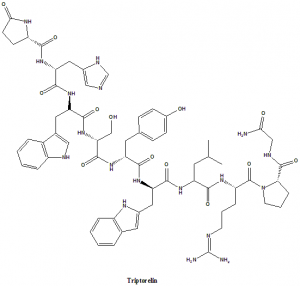 Triptorelin is a GnRH analogue. [1]

Crude products are separated and purified by C18 column and freeze-dried.

The drug used for the treatment of:

Common side effects of triptorelin are inability of sustaining erection, decreased libido and hot flashes.

Q.1  ‘Trelstar’ and ‘triptodur’ are the trade names of which drug??

Q.2 Predict the correct statement related to the therapeutic uses of drug triptorelin.

a) It is used for the treatment of Prostate cancer.

b) It is used as a beta blocker.

c) It is given during hypertension.

d) It is given during hypotension

Q.3 The correct statement related to the solubility of Triptorelin drug is?

b) Soluble in acetic acid; sparingly soluble in water

Q.4 Which amongst the following drugs is a synthetic agonist analogue of GnRH?

Q.6 Which of the following is NOT a side effect of Triptorelin?