Viscosity and rheology: Thixotropy, determination of viscosity, application of rheology in pharmacy and MCQs for GPAT, NIPER, Pharmacist and Drug Inspector exam

Thixotropy: Thixotropy is defined as the progressive decrease in viscosity with time for a constant applied shear stress followed by a gradual recovery when the stress is removed. Thixotropy is a time-dependent shear thinning property. Thixotropy can be defined as an isothermal and slow recovery of material consistency, lost through shearing. If the rate of shear is reduced once the desired maximum is reached, the down-curve would be superimposable on the up-curve. This is true for Newtonian systems.

A rheogram is a plot of shear rate, G, as a function of shear stress, F. Rheograms are also known as consistency curves or flow curves. The rheologic properties of a given material are most completely described by its unique rheogram. The simplest form of a rheogram is produced by Newtonian systems, which follow the equation for a straight line passing through the origin:

The slope, f, is known as fluidity and is the reciprocal ofviscosity, η:

Therefore, the greater the slope of the line, the greater is the fluidity or, conversely, the lower is the viscosity. The rheogram of Newtonian systems can easily be obtained with a single point determination.

In case of non-Newtonian systems, the down-curve can be displaced relative to the up-curve. With shear-thinning systems (i.e., pseudoplastic), the down-curve is frequently displaced to the left of the up-curve, showing that the material has a lower consistency at any one rate of shear on the down-curve than it had on the up-curve. This indicates a breakdown of structure (and hence shear thinning) that does not reform immediately when stress is removed or reduced. This phenomenon is known as thixotropy. 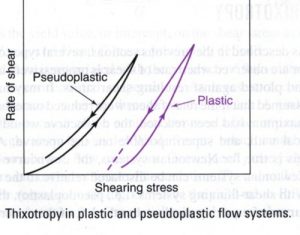 Thixotropic systems usually contain asymmetric particles. These particles set up a loose three dimensional network in the sample through numerous points of contact. At rest, this structure confers some degree of rigidity on the system, and it resembles a gel. As shear is applied and flow starts, this structure begins to break down as points of contact are disrupted and particles become aligned. The material undergoes a gel-to-sol transformation and exhibits shear thinning. On removal of stress, the structure starts to reform. This process is not instantaneous. Rather, it is a progressive restoration of consistency as asymmetric particles come into contact with one another by undergoing random Brownian movement.

Thixotropy can be measured by two methods:

(a) At constant shear rate

(b) At variable shear rate

Rheopexy- This is a characteristic exhibited by some thixotropic systems. A phenomenon where a sol forms a gel more readily when gently shaken than when allowed to form the gel while the material is kept at rest.

Dtermination of viscosity and thixotropy:

(a) For Newtonian system, single-point instruments that operate at a single shear rate are used. Example: Ostwald viscometer and falling sphere viscometer.

(b) For non-Newtonian system, multi-point instruments operate at a variety of shear rates are used. Example: a single-point determination is virtually useless in characterizing its flow properties. Example: Brookfield viscometer.

Therefore, although all viscometers can be used to determine viscosity of Newtonian systems, only those with variable-shear-rate controls can be used for non-Newtonian materials.

Application of rheology in pharmacy:

1.Brooke field viscometer is an example of

4.The principle method for measuring viscosity is

5.Materials whose consistency depends on the duration of shear as wheel as on the rate of shear, exhibit

6.Which of the following are now Newtonian materials which are time dependent?

7.Which among the following is not the example of thixotropic fluid?

9.Which of the following is not converting viscosity to pressure?

10.Which of these fluids has the highest viscosity?

11.What happens to the viscosity of liquid with the increase in temperature

12.Which of the following represents Kinematic viscosity?

14.Which of these ratios gives the value of viscosity of fluid?

c)Ratio of the velocity gradient and shearing stress

d)The ratio of the shearing stress to the velocity gradient

15.In which types of fluids it is observed that momentum transfer dominates cohesive forces with increase in temperature and hence viscosity increases