The mechanism of action of acetylcholine is as a cholinergic agonist.

Trimethylamine and 2-chloroethyl acetate reacts together to give acetylcholine. 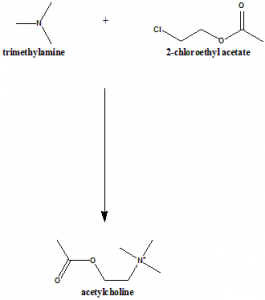 Acetylcholine is used for treatment of:

Side effects of acetylcholine are:

Q.1 “2-Acetoxy-N,N,N-trimethylethanaminium” is the IUPAC nomenclature of which drug?

Q.2 Molecular weight of Acetylcholine is?

Q.4 Mechanism of action of Acetylcholine can be due to?

a) Antagonism of cholinergic receptors

b) Agonism of cholinergic receptors

Q.5   Correct sequence for True and False for the given statements related with the SAR of drug acetylcholine.

When the nitrogen of the quaternary ammonium group is replaced with arsenic, phosphorous, sulfur or selenium, their activity Increases.

It is necessary for the atom present at the nitrogen position to have a Negative charge to have muscarinic activity.

When all three methyl groups are replaced by larger alkyl groups at the quaternary nitrogen, drug becomes inactive as agonist.

When all the methyl groups associated with the quaternary nitrogen atom are replaced by ethyl groups, the compound becomes cholinergic antagonist.

Q.6 Trimethylamine and 2-chloroethylacetate reacts together to give?

Q.7 The drug Acetylcholine is mainly used for?