Carbachol is a cholinergic agonist falls in the class of choline esters.

The interaction of beta-chloroethylcarbamate and trimethylamine produces carbachol. 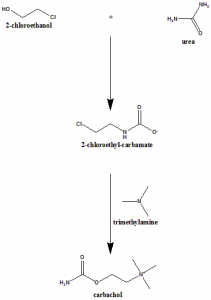 Carbachol is used for treatment of:

Side effects of carbachol are:

Q.1 What can be the correct IUPAC nomenclature of carbachol?

Q.2 Which amongst the following statements is/are incorrect related to the SAR of Carbachol?

I. For the maximum potency, the alkyl groups at the nitrogen atoms should not be larger than methyl groups.

II. Presence of oxygen in an ester form decreases the activity.

III. For maximum activity, there should be two- carbon atoms between the nitrogen and oxygen atom.

Q.3 The interaction of beta-chloroethylcarbamate and trimethylamine produces?

Q.5 Match the following drugs with correct number of chiral carbons they are having.

Q.6 An example of drug from class cholinergic agonist is?

Q.7 The type of ring system found in Carbachol?