Bethanechol is a cholinergic agonist falls in the class of choline esters.

i. 1-(N,N,N-trimethylammonium)propan-2-ol is reacted with phosgene.

ii. Reaction is followed by addition of ammonia to give bethanechol. [3] 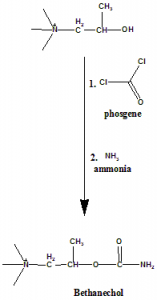 Bethanechol is used for treatment of:

Side effects of bethanechol are:

Q.1 Match the following with correct SAR of the drug bethanchol-

Q.2 Correct sequence for the True/False for correct IUPAC names of the drug can be?

Q.3 Molecular weight of Bethanchol is?

c) Both nicotinic and muscarinic receptors

Q.5 Which amongst the following is a therapeutic use of drug bethanchol?

a) Treatment of peptic ulcers

b) Treatment of Blurred vision

Q.6 Which of the following drug and their classification are correct?

Q.7 When compound ‘x’ reacts with 1-N,N,N-trimethylammonium)propan-2-ol, and on following the reaction by addition of ammonia, it produces Bethanchol.