Cevimeline is a cholinergic (muscarinic) agonist.

i. Reaction of quinuclidin-3-one with trimethylsulfoxonium iodide and NaH in DMSO to give epoxide.

ii. The epoxide is opened with SH2 in NaOH/water, yielding 3-hydroxy-3-(sulfanylmethyl)quinuclidine.

iv. Mixture is separated through fractional recrystallization in acetone to get Cevimeline. 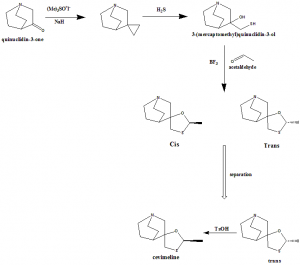 Cevimeline is used for treatment of:

Side effects of cevimeline are:

Q.2 Molecular weight of Cevimeline is?

Q.4 Cevimeline shows its action through binding with?

Q.5   Correct sequence for True and False for the given statements related with the SAR of drug Cevimeline.

Q.6 Starting materials for the synthesis of cevimeline can be?

a) Amphetamine and Atropine

Q.7 The drug Cevimeline is mainly used for?

a) Symptoms of dry mouth