Acid-base balance is all about maintaining the H+ ion concentration(pH) at an appropriate level. This is important for normal cellular function. The pH of blood is 7.35-7.45. To maintain this range, three major mechanisms takes place in the body-

Buffer acts to bind H+ ions, thus removes the highly reactive excess hydrogen ions from the solution. Buffers thus raise the pH, but do not remove H+ from the body. There are 3 buffer systems-

This type of buffer is found mostly in the intracellular fluid and blood plasma. The hemoglobin is a buffer within RBCs and albumins is a main protein buffer in blood plasma.

When the pH rises, following changes occur in the structure of protein. The released H+ ion reacts with the OH- ion(since pH rises) and forms water 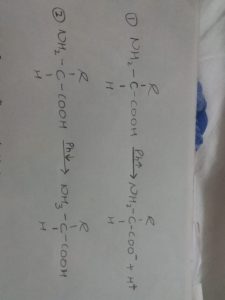 When the pH falls and become acidic, following changes occur in its structure. The free amino group at the other end of a protein acts  as a base reacting with H+ ion.

Since hemoglobin acts as a buffer for RBCs, so when blood flows through the systemic capillaries, The CO2 present in the tissue cells enters the RBCs and reacts with water to form carbonic acid(H2CO3). after the formation of H2CO3, it dissociates to form H+  and HCO3-. In the tissue cells when CO2 enters the RBCs at the same tine oxy-hemoglobin bond also breaks and hemoglobin picks up most of the H+ ion and forms Hb-H.

It is based on two structures, carbonate ion(HCO3-) and carbonic acid(H2CO3).

If the Ph rises, the following reaction takes place.  The carbonic acid thus formed dissociates into CO2 and water; The CO2 formed is exhaled through lungs 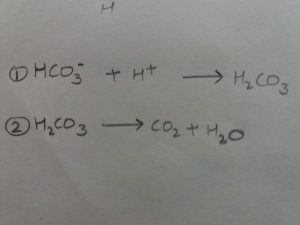 If the pH falls, the carbonic acid dissociates and following reaction occur. 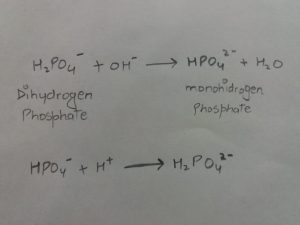 When the pH of blood rises, then the chemoreceptors  present in the medulla oblongata, aortic sinus and carotid sinus are stimulated. as these chemoreceptors are stimulated, they send nerve impulses to the inspiratory area of medulla oblongata which results in contraction of diaphragm. These contractions further facilitates exhalations of CO2, and less carbonic acid is formed. Thus Ph of blood comes back to normal.

4. Which of the following buffers functions for buffer systems for maintaining Ph?
A. protein buffer B. carbonic-bicarbonate buffer
C. phosphate buffer D. all of the above

5. Which of the following statement is NOT true?
A. intercalated cells do not secrete carbonate ions
B. dissociation of carbonic acid forms CO2
C. OH ions reacts with dihydrogen phosphate
D. Ph becomes basic when carbonate ions are secreted

6. What acts as a buffer within RBCs?
A. hemoglobin B. water
C. oxygen D. CO2

10. In which regions, the chemoreceptors for exhalation of CO2 mechanism NOT present?
A. medulla oblongata B. aortic sinus
C. carotid sinus D. none of the above