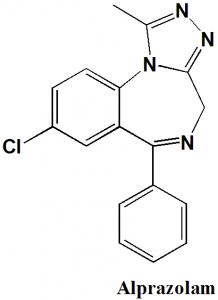 Alprazolam is a benzodiazepine sedative-hypnotic.

i. Alprazolam acts on benzodiazepine receptors BNZ1 and BNZ2.

ii. On boiling (3) with triethyl orthoacetate (4) in xylene eads to heterocyclization to form a triazole derivative (5).

iv. On oxymethylation of the (8) using formaldehyde (9), followed by substitution of hydroxyl group by phosphorous tribromide (10) gives 2-[4-(3′-methyl-5′-bromomethyl-1,2,4-triazolo)]-5-chlorobenzophenone (11).

v. On substitution of the bromine atom with an amino group using ammonia and spontaneous heterocyclization produces alprazolam. [2] 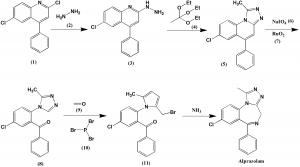 Alprazolam is used for:

Side effects of alprazolam are:

Q.1 Binding of alprazolam with acetylcholine muscarinic receptors results in?

a) Agonizing effect on muscarinic receptors

b) Antagonizing effect on muscarinic receptors

c) Do not produce any significant effect

d) Do not bind with muscarinic receptor

a) Treatment of Acute alcohol withdrawal

b) Treatment of seizures

Q.3 Which amongst the following are the correct statements with respect to the SAR of drug Alprazolam?

I. Ring A should include an aromatic or heteroaromatic ring for binding with 5-phenyl-1,4-benzodiazepin-2-one derivatives.

II. An electronegative group at 7-position of the ring A increases the functional anxiolytic activity.

III. Substitutions at 6, 8 or 9 position with electronegative group on ring A will decrease the functional anxiolytic activity.

Q.4 Type of ring structures present in the structure of Alprazolam?

Q.5 Correct sequence for the True/False for the physiochemical properties of the drug solifenacin?

Q.6 Correct statements for the IUPAC nomenclatures of the are?