The ear is divided in 3 regions- the outer ear, the middle ear, and the inner ear. The external or outer ear collects the sound waves and then heads them towards the tympanic membrane. the middle ear then conveys the vibrations to the oval window and the waves enters the inner ear which is filled with the receptors of  hearing and equilibrium. 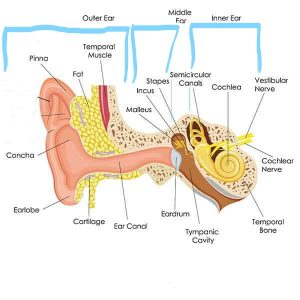 the outer ear consist of 3 parts-

Near the exterior opening, the auditory canal contains few hairs and specialized gland. they are called the ceruminous glands. these glands secrete earwax  known as cerumen.

It is a small air filled cavity in the temporal bone and is lined by epithelium. The middle ear is separated from outer  ear by the eardrum. and it is separated by the inner ear through a thin bony partition that contains two small openings called the oval window and round window. The middle ear consist of 3 auditory ossicles or auditory bones which are joined by synovial joint. these are-

just below the oval window, is the another opening known as the round window. The anterior wall of middle ear contains an opening that leads directly into the auditory tube. It is commonly known as eustachian tube. 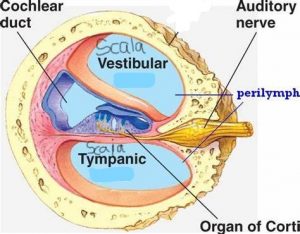 5. Which of the following statement is NOT true?
A. semicircular ducts are filled with perilymph
B. utricles and saccule are two sac like structures
C. cochlea makes almost 3 turns around bony core
D. basilar membrane separates cochlear duct from scala tympani