The female reproductive organs also known as genitalia, include both external and internal organs 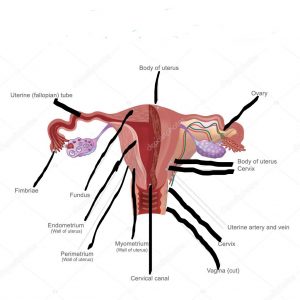 • Labia majora:- these are the two large folds that forms the boundary of vulva. They are composed of skin, fibrous tissue and consist of large no. of sebaceous and eccrine sweat gland. Posteriorly they merge with the skin of perineum and anteriorly it joins in front of pubic symphysis.
• Labia minora:- these are two smaller folds of skin between the labia minora and contains sebaceous glands. The cleft between the labia minora is the vestibule.
• Clitoris:- these are like penis in males and contains sensory nerve endings and erectlie tissue.
• Vestibular glands:-these are situated one on each side of vaginal opening, their ducts open into the vestibule. They secrete mucous that keeps the vulva moist.

The internal genitalia lie in the pelvic cavity and consist of vagina, uterus, uterine tubes and two ovaries.

• VAGINA:-the vagina is a tube of muscular and fibrous tissue and is lined with stratified squamous epithelium and opens into the vestibule at the distal end. In adults, the anterior wall is about 7.5cm long and the posterior wall is of 9cm. the difference in length is due to the angle of insertion of cervix through the anterior wall. Hymen is a thin layer of mucous membrane which partially blocks the opening of vagina
The vaginal wall has 3 layers- the outer layer is of areolar tissue, the middle layer is of smooth muscle and the inner layer is of stratified squamous epithelium. It does not have any secretory glands but the surface is moist due to the cervical secretions.

The vagina acts like a container for the penis during the sexual intercourse
and also provides a passageway through which the baby passes during childbirth.

• UTERUS:- it is a hollow pear shaped organ which is almost flat and lies in the pelvic cavity between the bladder and the rectum. It is about 7.5cm long , 5cm wide and weighs 30-40 gm. There are three parts of uterus-
1. Fundus- it is dome shaped part above the opening of uterine tubes.
2. Body- it is the main part of the uterus
3. Cervix- also known as neck of the uterus and passes through the anterior wall of vagina.
The wall of uterus have 3 layers- the outer layer known as perimetrium, middle layer is myometrium and inner layer is endometrium
The uterus is supported by surrounding organs, muscles and ligaments. The ligaments that supports are broad ligaments, round ligaments and uterosacral ligaments etc.

• UTERINE TUBES:- also known as fallopian tubes are about 10cm long and extends from the uterus between the body and fundus. The end of each tube has fingerlike projections called fimbriae.
The uterine tubes are covered with broad ligaments , middle layer of smooth muscle and are lined with ciliated epithelium.
The tubes propel the ovum from ovary to the uterus through peristalsis and ciliary movement, fertilization of ovum takes place in the tubes.

• Ovaries:- these are the female gonads that lies on the lateral walls of the pelvis. Each ovary is attached to the upper part of uterus. Blood vessels and nerves pass to the ovary through the mesovarium.
The ovaries has two layers-
1. Medulla- this lies in the center and consist of fibrous tissue.
2. Cortex- this surrounds the medulla, and is made of connective tissue

1. The external organs of female reproductive system are collectively known as?
A. genitalia B. vulva
C. perineum D. Fundus

2. which of the following comes under the functions of female reproductive system?
A. formation of ova

D. all of the above

3. Which organ corresponds to the penis of male reproductive system?
A. clitoris

6. Out of the following options, which organ is supplied with sympathetic nerve supply?
A. ovaries B. vagina
C. uterus D. none of the above

8. Which of the following ligaments extends cervix and vagina to the side wall of pelvis?
A. broad ligaments B. round ligaments
C. cardinal ligaments D. uterosacral ligaments

9. Which organ lies in the pelvic cavity between the bladder and the rectum?
A. uterus B. vagina
C. fallopian tubes D. clitoris

10. The opening of vagina urethra and ducts of vestibular glands opens into?
A. labia majora B. uterus
c. vestibule D. none of the above