Bacterial Reproduction/Study material for Bacteria Chapter and MCQs for GPAT

Bacteria can reproduce through binary fission and by exchanging their genetic material. Binary fission produces the daughter cells having the same characteristics as that of the parent cell. In the conjugation and transformation methods, two organisms are involved in the reproduction process. 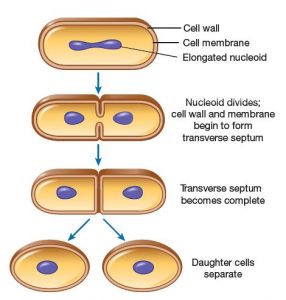 DNA is transferred from on bacteria to another through a structure called pilus. DNA in the form of plasmid is transferred from the donor (F+) cell to the recipient (F–) cell. Donor cell has an additional F factor or fertility factor which can code for protein that can make the sex pilus. The following steps are involved in the process of conjugation:

In this process, the bacteria takes the DNA from the environment. When the DNA taken is in circular form, then it is called plasmid, which can be passed to the other generations. This technique in also used in laboratories for introducing new DNA fragments into the bacterial cells.

The process of bacterial transformation is very useful  in the molecular cloning. Multiple copies of recombinant DNA molecule can be formed by using transformation process.

1. Daughter cells produced from binary fission in bacteria have?

a. Same characteristics as that of the parent cell

b. Different characteristics as that of the parent cell

c. May have same of different characteristics as that of the parent cells

2. Genetic material is transferred from one bacteria to another bacteria in Bacterial conjugation with the help of?

3. Molecular cloning of recombinant DNA can be done by the help of?

4.Which Viruses are involved in the Bacterial Transduction process?

5. Bacteria can reproduce through which method?

6. Transfer of genetic material can take place in bacteria through which method?

7. Pilus is formed by which type of cell?