All the perfect fungi can reproduce sexually as well as asexually, but fungi imperfecti can only reproduce asexually. In sexual as well as in asexual reproduction, fungi forms spores, which are very light in weight and can be dispersed with the help of wind, water or animals.

Majority of fungi reproduce asexually through formation of spores. While, some fungi can also reproduce asexually through budding and fragmentation. In fragmentation, mycelium is fragmented into pieces and each piece can grow into separate mycelium. Whereas, in budding, a bulge is formed on the side of the cell of fungi and nucleus divides mitotically. At the end, the bud detaches itself from the parent cell and can grow as an independent organism. 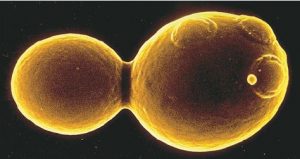 Formation of spores during asexual reproduction includes mitosis divisions in which only one parent is required. Different types of spores can be produced by the fungi. Conidiospores are unicellular or multicellular and are released directly from the tip of the hypha. Sporangiospores are the spores produced in the sporangium. In the process of fragmentation, hypha forms unicellular cells which are then released in environment in form of spores. Individual grown from asexual spores are genetically identical to the parent organism. 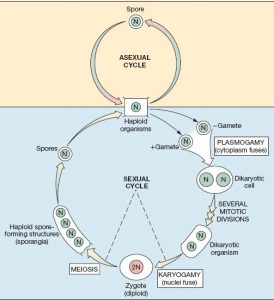 Fig: Life cycle of a fungi

i. It starts from haploid organism (N+N)

ii. Karyogamy which is the fusion of nuclei to produce diploid organism (2N)

iii. Meisos results in the formation of 8 ascospores in the ascus.

iv. Ascospores are released in environment which though mitosis, udergoes asexual reproduction and produces Male and Female strains separately. 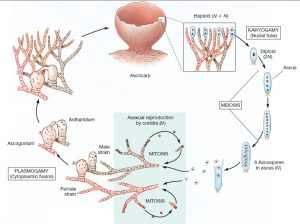 1. Number of parents required during formation of spores in fungi during asexual reproduction is?

2. Reproduction in fungi can be through?

a. Asexual reproduction only

b. Sexual reproduction only

c. Both sexual and asexual reproduction in all the classes of fungi

d. Asexual reproduction and sexual in most of the fungi

3. Sexual reproduction is not found in which class of fungi?

4. Type of spore formed during asexual stage of Ascomycota is called?

5. Deuteromycota class is also called as ‘Fungi Imperfecti’ as?

a. Hyphae is absent in them

b. They cannot move

c. Sexual reproduction is absent in them

d. They are non-pathogenic to human

6. Number of ascospores present in one ascus after completion of miosis is?

7. Correct sequence for the sexual cycle of fungi starting from the haploid organism can be?