Above figure is taken from resveralife.com- only for Educational purpose

The superior vena-cava, inferior vena-cava and coronary sinus drain the deoxygenated blood from the entire body into the right atrium. The two AV valves are present between the atrium and the ventricle. The AV valve present on the right side is the tricuspid valve. Through the tricuspid valve the deoxygenated blood flows from right atrium to right ventricle.

Coronary circulation:- Coronary circulation supplies the heart chambers with blood. They have specialized arteries known as coronary arteries which surrounds the entire heart muscles fibers. Coronary arteries are branched from the aorta and supply the heart. The deoxygenated blood is carried away through the coronary veins; all these veins club together and form coronary sinus which drains the deoxygenated blood into right atrium.

The conduction system is a network of specialized cardiac muscle fibers known as auto-rhythmic fibers which provides the rhythm of heart, or a heartbeat. 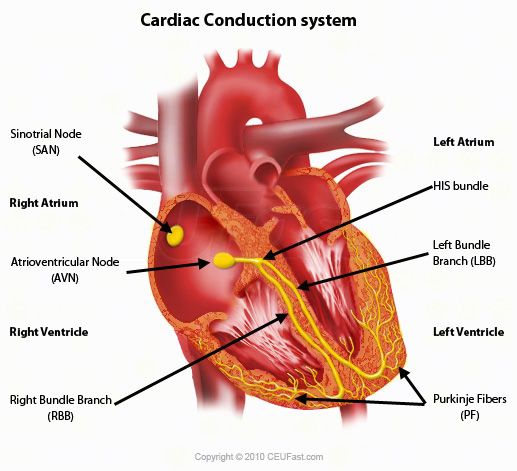 3. Which type of muscle fibers facilitates the conduction system?
A. skeletal muscle B. cardiac muscle
C. auto-rhythmic fibers D. both B and C

4. Which of the following areas are supplied by the coronary circulation?
A. right atrium B. interventricular septum
C. left ventricle D. all of the above

5. Which of the following statement is NOT true?
A. coronary arteries are branched from systemic capillaries
B. Purkinje fibers spread impulses within the entire ventricle myocardium
c. pulmonary circulation converts deoxygenated blood into oxygenated
D. pulmonary veins carries oxygenated blood

6. which of the following valve is present between the right atrium and right ventricle?
A. tricuspid valve B. bicuspid valve
C. SL valve D. none of the above

7. Match the following-
a. SA node 1. Initiates nerve impulses
b. AV node 2. Located at the interventricular septum
C. bundle of HIS 3. Situated in the interatrial septum
d. Purkinje fibers 4. Supplies the ventricles with conduction impulses

8. At what point, the impulses flow from atria to the ventricles?
A. AV node B. SA node
C. bundle of HIS d. right and left bundle branches

9. Which of the following structure is NOT supplied by the systemic circulation?
A. bronchioles B. trachea
C. alveoli D. nose

10. Which of the following carries the oxygenated blood?
A. superior vena-cava B. inferior vena-cava
c. coronary sinus D. none of the above