A cell division is a sequence of events by which a somatic cell duplicates its contents and results in two cells. When a cell reproduces, it must replicate( means duplicate) all its chromosomes to pass their genes to the next generation cells. A cell cycle consist of two major phases :- the interphase during which the cell grows and does not divide; and the mitosis phase during which the cell divides.

The mitotic phase of cell cycle consist of the nuclear division(mitosis) and the cytoplasmic division(cytokinesis).

The mitosis- is a continuous process, when one stage merges directly into the next one. It has different phases which are as follows:

Cytokinesis:- during this phase, cytoplasmic division occurs. contractile ring forms cleavage around the center of coil; hence divides the cytoplasm into two equal and separate parts. 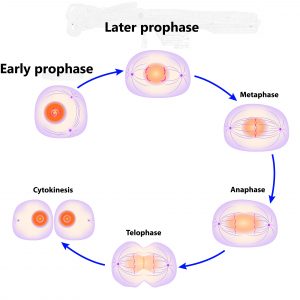 3. What is the function of somatic cell division?
A. same no. of chromosomes replicated b. replace dead cell
c. same kind of chromosomes D. all of the above

4. During which phase of interphase, is the cell metabolically active?
A. G1 phase B. S-phase
C. G2 phase D. all of the above

6. What is the shape of chromosome during the Anaphase?
A. t-shaped B. s-shaped
c. A-shaped D. V-shaped

7. During which phase, enzymes and proteins are synthesized?
A. S phase B. prophase
C. G2 phase D. telophase

8. Which of the following statement is true?
A. In reproductive cell division, chromosomes are half of parent cell
B. anaphase is the final stage of cell division
C. cytokinesis is about nuclear division
D. S- phase is highly metabolically active phase

9. During which phase, the centrosomes replication begins?
A. anaphase B. metaphase
C. G2 phase D. none of the above

10. When does non-dividing cells exits from the cell cycle?
A. G1 phase B. G2 phase
C. prophase D. cytokinesis