There are mainly two theory for column Chromatography is

Plate Theory is given by martin and synge in 1941.

Plate Theory is useful for understanding the mechanism of retention and transfer of analyte through the column length.

This Theory is based on the assumption that column is consists of the large number of plate called as Theoretical Plate.

At each plate separate equilibration of analyte between stationary and mobile phase is achieved. 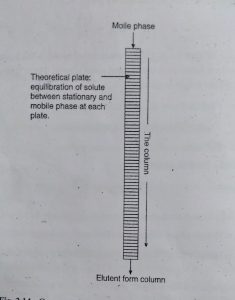 N=L/H it is also written as

Martin and synge given two term

HETP is minimum height to required equal distribution of analyte and mobile phase on the stationary phase.

It was introduced by van Deemter.

It describes the effect of an Elution band as well as it time of Elution.

Van Deemter equation describe the relationship of the height of a theoretical plate H and the average linear velocity of the Mobile phase.

H = Height of a theoretical plate

λ = correction factor for the irregular of the column packing

In this case the space along the column are not uniform.

When a sample is migrate down the column each molecule “sees” different path and each path is of a different length.

Some molecules take the longer paths and other take the shorter path.

The term B represent band broadening by longitudinal diffusion the molecular diffusion both in and against the flow direction :

DG = diffusion coefficient of the Analyte in the gas phase

Diffusion occur on the molecular level resulting from movement of molecules after collision.

The diffusion is about 100- 1000 fold faster in gas than in liquid therefore B term shows higher impact in GC than in LC.

In case of thick films, solutes must travel to reach the interface. With smaller diffusion coefficient these solute molecules travel more slowly. These factor lead to lower rate of mass transfer and plate height is increased.