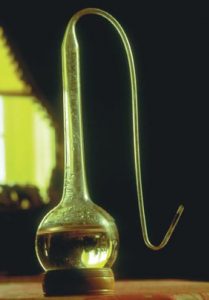 (The above image is taken only for educational purpose from Microbiology Principles and Explorations by J.G. Black)

I. There must be a causative agent present in the host suffering from a disease.

II. Disease causing organism can be isolated in pure culture.

III. If the sample of culture of disease causing organism is inoculated in a healthy host, it will produce the same disease.

IV. Disease causing organism can be recovered from the inoculated host animal.

1. Microscope was made available by the year?

2. Cell theory was developed by?

3. Electron microscope was made available during?

4. The theory of spontaneous generation was totally disproved by using swan-necked flask by?

5. Which of the following statements are correct related with the cell theory?

I. Cell theory was proposed by Schleiden and Schwann

II. According to cell theory, living organism may generated from the dead material spontaneously.

III. Cell is the basic unit of life.

6. Correct sequence for the true/false related with the Koch’s postulates can be?

7. Which of the following scientist supported the theory of spontaneous generation?