the thymus gland lies in the upper part of the mediastinum and extends upward till the neck. It weighs around 10-15g and weight increases till puberty when the maximum weight is 30-40g. Anteriorly associated with thymus is the sternum and four coastal cartilage, posteriorly is the aortic arch and inferiorly is the heart.

the thymus consist of two lobes which are joined together by the areolar tissue and these lobes are enclosed  by fibrous capsule, and divides the lobes into lobules which consist of lymphocytes and irregularly arranges epithelial cells.

lymphocytes originate from red bone marrow and those who migrate  to thymus develops into T- lymphocytes. the T-lymphocytes can distinguish the self(body) tissues from foriegn tissues, also it has the ability to react on only one specific antigen out of millions. 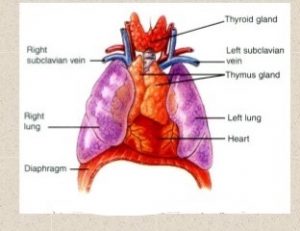 Lymph nodes are the oval bean-shaped organs which are mostly found in groups inside the lymph vessels. the lymph has to compulsory pass through 8-10 modes before it enters into the blood. It has an outer fibrous capsule that comes down to the lymph substance and divides them in partitions known as trabeculae. The main substance of lymph node is the reticular and lymphatic tissue which contains lymphocytes and macrophages. Nods also consist of afferent and efferent vessels, afferent vessels from where lymph enters the nodes and efferent from where the lymph exits. the large no. of lymph nodes are present in groups In different parts of the body.

functions of lymph nodes include 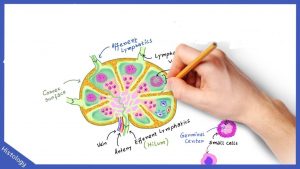 it is the largest lymphatic organ which also contains reticular and lymphatic tissue. it is oval in shape and lies in the abdominal cavity between  the  fundus  of the stomach and the diaphragm. it is purple in color and is about 12cm long, 7cm wide and weighs about 200g. It is surrounded by a capsule made of fibrous and elastic tissue which further on dividing forms trabeculae. Between the trabeculae is the cellular material known as splenic pulp which contains lymphocytes and macrophages.

functions of spleen are 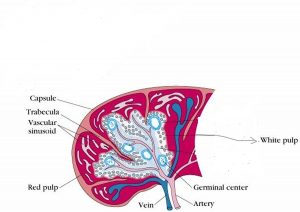 these are the egg shaped mass of lymphatic tissue and not surrounded by a capsule. the lymphatic nodules mostly occur in multiple numbers in specific areas, like tonsils which are found in the pharyngeal regions likewise some occur in ileum of small intestine, some forms the ring at the junction of oral cavity and oropharynx. some of the nodules are scattered by the lamia propria of mucous membrane that lines GIT, urinary, respiratory systems etc, so the lymphatic nodules of these regions are also known as mucous-associated lymphatic tissue(MALT).

7. Which of the following statement is NOT true?
A. lymphatic system filters both lymph as well as blood
B. lymph transports proteins from GIT into the blood
c. the capsule that surrounds the spleen is a fibroelastic capsule
D. B-lymphocytes produces antibodies