Latent heat The quantity of heat absorbed or released by a substance undergoing a change of state. Also called heat of transformation. In the case of water, 1 gram of ice at 0⁰C requires 336 joules of energy to convert it to 1g of water at 0⁰C (latent heat of fusion). As matter change from higher kinetic energy to lower one (e.g. stream to water) this latent energy is released. The concept of latent energy has practical applications: Ice milting on the skin takes considerable energy(heat) from the skin, thus cooling it , whereas paraffin wax solidifying on the skin gives out considerable heat to the skin, thus warming it.

In case of liquids, kinetic energy is not distributed evenly among molecules and some of the molecules acquire more energy and hence higher  velocities than others. The molecules that have sufficient energy to overcome intermolecular attractions are able to escape from the surface into the vapour phase (gas phase). The process is known as evaporation.

where, ‘H is the molar heat of vaporization, p1 and p2 are the vapour pressure at absolute temperatures T1 and T2.

Vapour pressure of a mixture of liquids –

In the case of miscible liquids (solution of a liquid in liquid), the partial vapour pressure exerted by each components is proportional to its molar concentration in the mixture solution. The total vapour pressure P is given by :

PoA & PoB are the vapour pressure exerted by the pure components A and B respectively.

Sublimation-critical point: Sublimation is the process where a solid changes from a solid to a vapor without passing through the liquid state. Sublimation is an endothermic phase transition that occurs at temperatures and pressures below a substance’s triple point in its phase diagram. In thermodynamics, the triple point of a substance is the temperature and pressure at which the three phases (gas, liquid, and solid) coexist in thermodynamic equilibrium. A phase transition in which a solid is converted to a gas, without passing though an intermediate liquid phase. Dry ice” is actually solid, frozen carbon dioxide, which happens to sublimate, or turn to gas, at a chilly -78.5 °C (-109.3°F). The fog you see is actually a mixture of cold carbon dioxide gas and cold, humid air, created as the dry ice “melts” it mean sublimates. 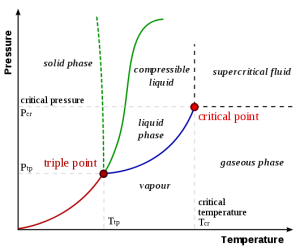 1- The main advantage of sublimation is for purification process.

2- The minimum amount of product is loss.

3- Solvents are not used.

4- Most traces of any solvent in compound are effectively eliminated.

5- when the substance weighs less than 100mg the best method for purification is sublimation.

Sublimation is caused by the absorption of heat which provides enough energy for some molecules to overcome the attractive forces of their neighbors and escape into the vapor phase. Since the process requires additional energy, it is an endothermic change. The enthalpy of sublimation (also called heat of sublimation) can be calculated by adding the enthalpy of fusion and the enthalpy of vaporization.

Desublimation refers to the process in which a gas changes directly to a solid without going through the liquid state. Deposition as a change of state often occurs in nature. For example, when warm moist air comes into contact with very cold surfaces—such as the ground or objects on the ground—ice crystals are deposited on them. Deposition is used widely to create materials in industry, especially to apply a thin coating to materials used for cutting or shaping. Much research is ongoing in the field of chemical vapor deposition, especially in the area of materials used to cover polymers, and finding materials that are less harmful to the environment.

Eutectic mixtures: A eutectic mixture is defined as a mixture of two or more components which usually do not interact to form a new chemical compound but, which at certain ratios, inhibit the crystallization process of one another resulting in a system having a lower melting point than either of the components. Eutectic mixture formation is usually, governed by following factors:

(c)the components should have chemical groups that can interact to form physical bonds such has intermolecular hydrogen bonding etc. 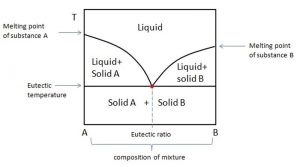 In pharmaceutical practice, eutectic mixtures are difficult to dispense in the form of a powder. In order to incorporate such materials in a powder, it is essential to first mix each ingredient separately with an inert diluent such as light magnesium oxide, magnesium carbonate, starch, kaolin etc. followed by gentle blending of the different positions. Alternative the eutectic materials can first be triturated together in order to force them to liquify. The liquid can then be adsorbed on an inert diluents.

2.Dry ice is used in fire extinguishers. The dry ice is stored in the cylinder in a solid form. When sprayed on a fire it quickly changes into the gas known as carbon dioxide(CO2).
What is this change of state called?

4.During the process of sublimation,

b)a solid turns into a liquid

d)a liquid turns into a gas

5.An uncovered pot of soup is simmering on a stove, and there are water droplets on the wall above the back of the stove. What sequence can you infer has occurred?

6.When a person wearing glasses enters a warm house after being outside on a cold day, their glasses fog up because of

7.The opposite of vaporization is called

8.The process in which heat is required to convert a liquid into the vapour state is known as:

9.A substance with a high vapour pressure at normal temperatures is often referred to as

10.Name the liquid with higher vapour pressure in the following pairs:

11.The temperature at which the densities of both the phases become equal and the two phases cannot be distinguished is called

12.If the external pressure above the surface of a liquid is decrease or increase the boiling point of the liquid is also decreased or increased.

13.In the case of miscible liquids (solution of a liquid in liquid), the partial vapour pressure exerted by each components is proportional to its

15.A homogeneous mixture of substances that melts or solidifies at a single temperature that is lower than melting point of the constituents is called