A phase is the part whose physical and chemical properties are completely equal and homogenous. it is separated from other parts of the system by interfaces. A system containing water and its vapor is a two-phase system. An equilibrium mixture of ice, liquid water, and water vapor is a three- phase system.

Phase diagram (also known as Equilibrium Diagrams) shows the multisystem state changes with the temperature, pressure, composition and other intensive properties. The simplest phase diagrams are pressure-temperature diagrams of a single simple substance. 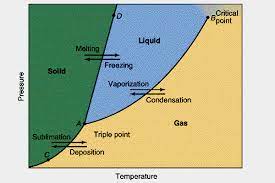 The Gibbs phase rule: To understand and define the state of a phase, knowledge of several independent variables is required. Independent variables (also called Intensive variables) are the variables that do not depend on the volume or size of the phase, e.g. temperature, pressure, density, boiling point and concentration. The Gibbs phase rule is expressed as follows: F= C – P+ 2 F is the number of degrees of freedom of the system which is the least number of intensive variables required to define the system completely. C: number of components, P: number of phases present.

1.The temperature at which two conjugate solutions merge into one another to form one layer is called

2.The part whose physical and chemical properties are completely equal and homogenous is called

3.Which of the following is a two-phase system?

4.For the study of distribution law the two solvents should be

5.An equilibrium mixture of ice, liquid water, and water vapor is a

7.A gas or a gaseous mixture is a

8.The solubility of solids generally rises with

c)Increase in volume of the solvent

9.When a saturated solution prepared at a high temperature is cooled, we get

11.Phase diagram is also known as

13.The Gibbs phase rule is expressed as follows:

14.For three component systems C is equal to

15.For three component systems P is equal to