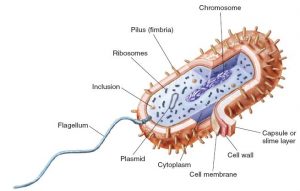 structure of a bacillus

The above image is taken only for educational purpose from Microbiology Principles and Explorations by Jaquelyn G. Black

the above image is taken only for educational purpose from

the above image is taken only for educational purpose from

1. Cell of bacteria is made up of?

2. The gap between cell wall and cell membrane is called?

3. Many ribosomes combine together to form a chain known as?

4. Glycocalyx is made made up of?

5. Which of the following are characteristics of gram-positive bacteria?

I. Presence of tichoic acid

6. Correct sequence for True/False for  the given statements can be?

7. Which of the following statements are correct related with the cell membrane of prokaryotic cells.