Particles dispersed in a liquid medium may become charged in one of two main ways. Ionic species present in a solution may be adsorbed at the surface or, alternatively, charges on the surface may arise due to the ionization of groups located at the surface. The presence of charge at an interface has profound effects on the nature of the interfacial region. The surface charge will influence the distribution of ions in the aqueous medium surrounding the solid particles. The result is the formation of what is known as an electric double layer. If the surface charge is negative, there will be a region of tightly bound solvent molecules and positive counterions immediately adjacent to the surface. Thus, the first layer, called the stern layer, is tightly bound, whereas the second layer (which still contains an excess of positive ions), called the diffuse layer, is more diffuse. 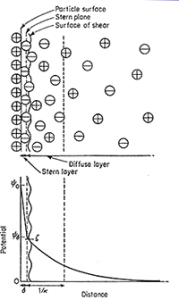 Most of the observed properties of a disperse system reflect the net force of interaction between the particles that the system comprises. The main forces that have been identified are electrostatic repulsive forces, which arise from overlapping of the diffuse double layers, and van der Waals attractive forces, which arise from the electromagnetic fluctuations in the molecules that make up the surface.

The balance between electrostatic repulsive and van der Waals attractive forces as a function of electrolyte concentrations is known as the DLVO theory.

At low electrolyte concentration, the interaction curve contains a much larger primary maximum and particle interactions are minimized. The repulsive forces predominate at low electrolyte concentration and therefore the particles remain independent, and the system is considered dispersed. This type of system is called a deflocculated system. On increasing the electrolyte concentration, the repulsive forces are greatly reduced and the attractive van der Waals forces predominate. These net attractive forces cause the formation of an aggregate of particles. This attractive region is called the secondary minimum and is responsible for the particle interaction termed flocculation. Addition of an electrolyte past this point may result in a reversal of charge, which in turn would cause deaggregation and ultimate caking of the system.

The effectiveness of the electrolyte in aggregating the particles depends on the valence of the ions having a charge opposite to that of the hydrophobic particle.

The Hofmeister or lyotropic series rule applies to hydrophilic particles in a manner somewhat analogous to the Schulze–Hardy rule, and takes into account not only the charge but also the ionic size and hydration capability. In order of decreasing aggregating ability, the monovalent cation and anion progressions are, respectively, Cs+, Rb+, NH4+, K+, Na+, Li+, and F+, IO3–H2PO4,BrO3–,CI, CIO3, Br–, NO3, CIO4–, I–, CNS–.

In addition to techniques involving sedimentation and redispersibility factors, rheologic methods can also be used to help determine the settling behaviour and the arrangement of the vehicle and particle structural features for purposes of comparison.

The majority of rheologic investigations of suspension systems have been carried out at high shear rates and on systems that must be made uniform before evaluation. A practical rheologic method involves the use of the Brookfield viscometer.

Rheologic Considerations: The principles of rheology can be applied to a study of the following factors: the viscosity of a suspension as it affects the settling of dispersed particles, the change in flow properties of the suspension when the container is shaken and when the product is poured from the bottle, and the spreading qualities of the lotion when it is applied to an affected area. Rheologic considerations are also important in the manufacture of suspensions. The only shear that occurs in a suspension in storage is due to a settling of the suspended particles; this force is negligible and may be disregarded. When the container is shaken and the product is poured from the bottle, however, a high shearing rate is manifested.

As suggested by Mervine and Chase, the ideal suspending agent should have a high viscosity at negligible shear, that is, during shelf storage; and it should have a low viscosity at high shearing rates, that is, it should be free-flowing during agitation, pouring, and spreading. pseudoplastic substances such as tragacanth, sodium alginate, and sodium carboxymethylcellulose show these desirable qualities.

The Newtonian liquid glycerin is included in the graph for comparison. Its viscosity is suitable for suspending particles but is too high to pour easily and to spread on the skin. Furthermore, glycerin shows the undesirable property of tackiness (stickiness) and is too hygroscopic to use in undiluted form. A suspending agent that is thixotropic as well as pseudoplastic should prove to be useful because it forms a gel on standing and becomes fluid when disturbed.

1. _____ is the process of disappearance of small particles or droplets by dissolution and deposition on the larger particles and droplets

2.Clear boundary between the sediment and the supernatant liquid is observed in deflocculated suspension

4.How surfactants will facilitate or aid wetting of hydrophobic material in liquid?

c)Both a and b

5.The HLB system is used to classify

6.Suspension of hydrophobic drug formulated with

7.The stability of suspension can be evaluated by

8.Structured vehicle is included in the formulation of a suspension in order to

9.During storage period, in suspension crystal growth is observed due to

b)Fluctuation in the ambient temperature

10.In stoke’s relationship, a parameter that greatly changes velocity of settling is

11.In case of suspensions, all statements below are true except

12.Which of these preparation is not qualified as a suspension?

a)Barium metal for radio diagnostic use

b)Calamine lotion for antiseptic use

d)Vitamin B complex as nutritional supplement

13.The value of sedimentation volume gives a knowledge about the ____ of the suspension

14.Brownian movement ____ the sedimentation of suspending particles to some extent