The initial dispersion of an insoluble powder in a vehicle is an important step in the manufacturing process and requires further consideration. owders sometimes are added to the vehicle, particularly in large-scale operations, by dusting on the surface of the liquid. It is frequently difficult to disperse the powder owing to an adsorbed layer of air, minute quantities of grease, and other contaminants. The powder is not readily wetted, and although it may have a high density, it floats on the surface of the liquid. Finely powdered substances are particularly susceptible to this effect because of entrained air, and they fail to become wetted even when forced below the surface of the suspending medium. The wettability of a powder can be ascertained easily by observing the contact angle that powder makes with the surface of the liquid. The angle is approximately 90° when the particles are floating well out of the liquid. A powder that floats low in the liquid has a lesser angle, and one that sinks obviously shows no contact angle. Powders that are not easily wetted by water and accordingly show a large contact angle, such as sulfur, charcoal, and magnesium stearate, are said to be hydrophobic. Powders that are readily wetted by water when free of adsorbed contaminants are called hydrophilic. Zinc oxide, talc, and magnesium carbonate belong to the latter class.

Surfactants are quite useful in the preparation of a suspension in reducing the interfacial tension between solid particles and a vehicle.  As a result of the lowered interfacial tension, the advancing contact angle is lowered, air is displaced from the surface of particles, and wetting and deflocculation are promoted.

Assuming that the powder is properly wetted and dispersed, we can now consider the various means by which controlled flocculation can be produced so as to prevent formation of a compact sediment that is difficult to redisperse. Electrolytes act as flocculating agents by reducing the electric barrier between the particles, as evidenced by a decrease in the zeta potential and the formation of a bridge between adjacent particles so as to link them together in a loosely arranged structure. If we disperse particles of bismuth subnitrate in water, we find that,they possess a large positive charge, or zeta potential. Because of the strong forces of repulsion between adjacent particles, the system is deflocculated. By preparing a series of bismuth subnitrate suspensions containing increasing concentrations of monobasic potassium phosphate, it gives a correlation between apparent zeta potential and sedimentation volume, caking, and flocculation. The addition of monobasic potassium phosphate to the suspended bismuth subnitrate particles causes the positive zeta potential to decrease owing to the adsorption of the negatively charged phosphate anion. With the continued addition of the electrolyte, the zeta potential eventually falls to zero and then increases in the negative direction. Microscopic examination of the various suspensions shows that at a certain positive zeta potential, maximum flocculation occurs and will persist until the zeta potential has become sufficiently negative for deflocculation to occur once again.  The onset of flocculation coincides with the maximum sedimentation volume determined.

Surfactants, both ionic and nonionic, have been used to bring about flocculation of suspended particles. The concentration necessary to achieve this effect would appear to be critical because these compounds can also act as wetting and deflocculating agents to achieve dispersion.

Although the controlled flocculation approach is capable of fulfilling the desired physical chemical requisites of a pharmaceutical suspension, the product can look unsightly if F, the sedimentation volume, is not close or equal to 1. Consequently, in practice, a suspending agent is frequently added to retard sedimentation of the flocs. Such agents as carboxymethylcellulose, Carbopol 934, Veegum, tragacanth, and bentonite have been employed, either alone or in combination. This can lead to incompatibilities, depending on the initial particle charge and the charge carried by the flocculating agent and the suspending agent.

For example, suppose we prepare a dispersion of positively charged particles that is then flocculated by the addition of the correct concentration of an anionic electrolyte such as monobasic potassium phosphate. We can improve the physical stability of this system by adding a minimal amount of one of the hydrocolloids . No physical incompatibility will be observed because the majority of hydrophilic colloids are themselves negatively charged and are thus compatible with anionic flocculating agents.

If, however, we flocculate a suspension of negatively charged particles with a cationic electrolyte (aluminum chloride), the subsequent addition of a hydrocolloid may result in an incompatible product, as evidenced by the formation of an unsightly stringy mass that has little or no suspending action and itself settles rapidly. Under these circumstances, it becomes necessary to use a protective colloid to change the sign on the particle from negative to positive. is is achieved by the adsorption onto the particle surface of a fatty acid amine (which has been checked to ensure its nontoxicity) or a material such as gelatin, which is positively charged below its isoelectric point. We are then able to use an anionic electrolyte to produce flocs that are compatible with the negatively charged suspending agent. 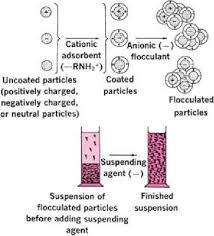 1.____ explains the rate of settling of particles.

2.____ solids are light in weight and possess good wetting properties

3._____ solids sediment rapidly after shaking and do not remain uniformly distributed in continuous phase

4.Which of the following is an indiffusible solid?

5.Which of the following is a diffusible solid?

c)Both a and b

9.Which of the following wetting agent is used in suspensions?

11.Which of the following is used as suspending agent?

12.Which of the following semisynthetic hydrocolloid is used as a suspending agent?

13.Which of the following synthetic hydrocolloid is used as a suspending agent?

14.Which of the following describes interparticulate interactions?

15.Which of the following explains downward movement of particles under gravity?