Hyoid Bone
It is a unique part of axial skeleton, as this bone does not articulate with any other bone. It is located in the anterior neck just between the mandible and larynx. The hyoid bone keeps the larynx open all the time; also the bone supports tongue and also serves as a site of attachment for tongue, neck and pharynx muscles. The bone consist of horizontal body and two projections: lesser horns and greater horns.

The first cervical vertebrae(C1) is atlas, on which the skull rests. It is essentially a ring of bone with no distinct body or spinous process. It has two small transverse process. It also have two facets with articulates with the occipital bone, through condyloid joint and they allow nodding movement.

Just below the atlas, is the second cervical vertebrae(C2) known as axis. It has small body and a superior projection known as odontoid process. This process lies on the posterior foramen of atlas and is held in position by transverse ligaments. This joint allows side to side movement.

The 12 thoracic vertebrae are larger than the cervical vertebrae. It is because that this part of vertebral column has to support more body weight. The facets of bodies and transverse process of thoracic vertebrae articulates with the ribs, except of T11 and T12. These joints are called as vertebrocostal  joints. Movements of thoracic region are limited due to the attachment of ribs to the sternum.

The 5 lumber vertebrae are the largest and strongest of the vertebral column as it has to bear the weight of upper body. They have spinous process to which the muscles of lower neck attaches.

The coccyx is a triangular bone, formed by the fusion of 4 coccygeal vertebrae. On lateral surface, are the series of transverse processes in which the pair is the largest. At the upper end, the base of coccyx articulates with the apex of sacrum. In females, the coccyx points inferiorly to allow passage for baby during birth; while in male, the coccyx points anteriorly.

Above Figure is taken for Educational Purpose Only.

Features of the vertebral column:-

The thoracic cage is the skeletal part of the thorax which consist of the ribs, sternum, their costal cartilages and the bodies of thoracic vertebrae. It protects the organs of thoracic and abdominal cavities; and also provides support to the bones of upper limb.

It is a flat bone which lies in the middle of the front of the chest. It is divided in 3 regions:-

Inflammation of any one or more costal cartilage is known as costochondritis. It causes local chest wall pain; and be resulted as a symptom for heart attack. 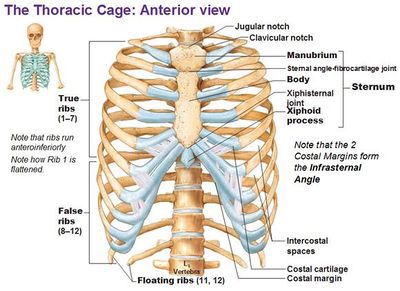 1. Which is the only bone of axial skeleton which does not articulate with any other bone?
A. occipital bone B. mandible
C. hyoid bone D. none of the above

3. Which type of joint lies between the atlas and the occipital bone?
A. saddle joint B. pivot joint
C. hinge joint D. condyloid joint

6. Which of the following is the part of sternum?

a. body B. xiphoid process
C. manubrium D. all of the above

7. Which connective tissue provides the attachment of the true ribs with sternum?
A. hyaline cartilage B. areolar tissue
C. fibrocartilage D. elastic cartilage

8. Which of the following statement is true?
A. transverse process of Lumber attaches neck muscle
B. the joint between C1 and occipital bone allows nodding
C. all the thoracic vertebrae articulates with ribs
D. the base of sacrum articulates with ilium to form sacroiliac joint