Transport across Plasma Membrane of CELL and MCQs for NEET, GPAT and CSIR NET JRF Exam

Transport of material across the plasma membrane of cell is essential for life of a cell. Certain substances must move into the cell for metabolic activities; while some substances which are produced by the cell or are waste products should move out of the cell. Majorly, there are two transport processes 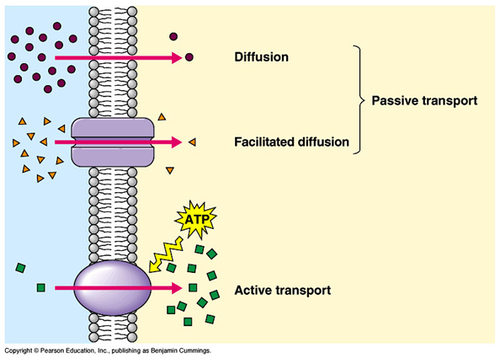 in this process, the substance crosses its semi-permeable plasma membrane and move up its concentration gradient that is from a lower to higher concentration,  using chemical energy . there are two sources of energy available for transport: energy obtained from hydrolysis of ATP;  and energy stored in ionic concentration gradient. Active diffusion is mainly of two types-

In this process, energy is derived from the hydrolysis of ATP. The carrier proteins that facilitates this process are called as pumps. The process majorly allows the sodium ions to move out of the cells and potassium ions to enter in; and the carrier which facilitates this movement is known as sodium-potassium pump. ATPase is a enzyme that hydrolysis ATP. The steps through which movement of sodium and potassium occurs are as follows-

In this process, the substances crosses its semipermeable plasma membrane and move down its concentration gradient, without the use of energy. is divided in different types which as follows-

This is a type of passive process, in which substances move freely across there plasma membrane without the help of membrane transport proteins. Hydrophobic and non-polar molecules move using simple diffusion; which includes- oxygen, CO2, nitrogen gas, fatty acids, steroids and fat soluble vitamins like (Vitamin A, D, E, K). some of the small uncharged polar molecules like water, urea and small alcohol can also move through simple diffusion.

In this type of transport process, the molecules which are highly polar and uncharged move across the plasma membrane with the help of membrane transport proteins. The membrane protein can either be membrane channel o membrane carrier.

membrane channels are mostly ion channels, which allows the ions which are too hydrophilic to pass through the nonpolar plasma membrane. In a plasma membrane, there are numerous of K+ ion and Cl- ion cannels and very fewer are Na+ and Ca ion channels. 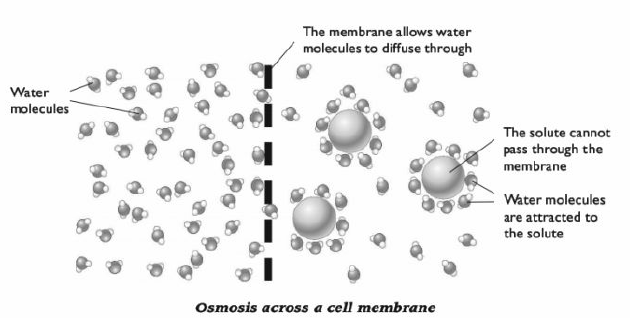 It is a type of diffusion in which there is a net movement of solvent through a selectively permeable membrane. The main solvent for the cells is water. During osmosis, water molecules passes through the plasma membrane in two-

3. Which substances are transported through facilitated diffusion?
A. galactose B. urea
C. oxygen D. alcohol

7. Which of the following statement is NOT true?
A. chemical changes leads to change in shape of pump
B. symporters are the one which moves substances in diff direction
C. Vitamin K is transported through simple diffusion
D. in passive transport, the substance moves down its concentration gradient

8. Which substance is transported through secondary active transport?
A. urea B. water
C. O 2 d. none of the above

9. What is the source of energy in active transport?
A. from sunlight B. hydrolysis of ATP
C. energy stored in ionic concentration gradient D. both A and C