The spinal cord is a long cylindrical portion of the central nervous system. It is suspended in the vertebral column and is enclosed by the meninges and cerebrospinal fluid. The spinal  cord is continuous with the medulla oblongata and extends from the upper border of the atlas(C1) to the lower border of L1. It is about 45cm long in an adult male.

The spinal cord performs some activities which are independent of brain; and are controlled by the levels of spinal cord; known as spinal reflexes. To facilitate these activities, there are neuron connections between the sensory and motor neuron, at the same or at different levels in spinal cord.

The spinal cord is divided in to  equal parts.

Anteriorly, divided by a deep median fissure and posteriorly by a narrow septum known as posterior median septum. The spinal cord is composed of grey matter in the center and surrounded by the white matter; supported by the neuroglia. 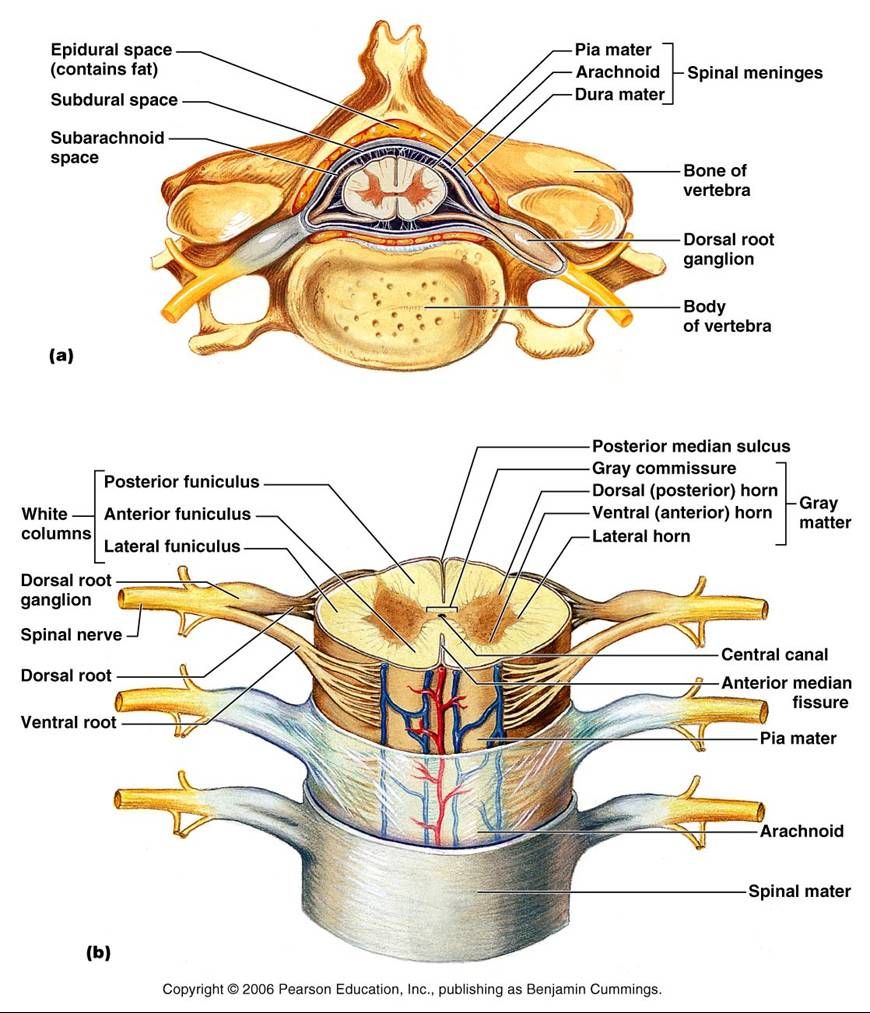 The arrangement of grey matter i the spinal cord is like letter H; having to posterior, two anterior and two lateral columns. The area of grey matter that lies transversely is the transverse commissure and it is pierced by the central canal. The cell bodies may belong to-

Posterior column of grey matter:– These column are composed of cell bodies which are stimulated by the sensory input from the body. The nerve fibers of these cell bodies contribute to the white matter of the cord and transmit sensory impulses to the brain.

Anterior column of grey matter:- These are composed of cell bodies of lower motor neurons; which are stimulated by the upper motor neuron and connector neurons.

The white matter of the spinal cord is arranged in 3 columns or tracts; named as posterior, anterior and lateral. These tracts are formed by the sensory nerve fibers which passes to the brain, motor fibers which are passing from the brain and nerve fibers to connector neurons.

Sensory nerve tracts in the spinal cord:- neurons that transmit impulses towards the brain are sensory The two main sources of sensations transmitted to the brain are

Motor nerve tracts in the spinal cord:– Neurons that transmit impulses from the brain are known as motor. stimulation of motor neurons results in-

1. upper motor neurons- this has its cell body in the primary motor area of the cerebrum.

2. lower motor neurons– this has its cell body in the anterior horn of the grey matter in the spinal cord.

1. upper motor neuron- this has its cell body in the brain at the level below the cerebrum. They helps in maintaining posture, body balance.

1. Which of the following is the part of central nervous system?

A. brain B. grey matter

C. spinal cord D. both A and C

2. The spinal cord is continuous with which part of the brain?

A. pons b. medulla oblongata

3. Does spinal nerves always form a link between the brain and the rest of the body?

4. the spinal cord consist of which type of cell bodies?

A. sensory neurons B. motor neurons

C. connector neurons D. all of the above

5.  Which column of grey matter receives the sensory input for the body?

C. lateral column D. both B and C

7.  Where does receptors for pain, temp, touch lies?

A. muscles B. joints

C. tendons D. none of the above

c. connector neuron D. all of the above

9. Which of the following statement is true?

A. spinal reflexes has 4 elements

B. lower motor neurons has cell body in anterior column of grey matter

10.What includes the autonomic reflexes?