The nucleus of all the body cells contain an identical copy of the individual’s genetic material. RBCs and sex cells(gametes) are the only two exception which does not contains the identical copy.

In a cell, chromatin (genetic material) is diffused and is hard to see under a microscope. But when the cell is prepared for dividing, It converts into compact sausage-shaped structure; which are known as chromosomes. Each chromosome ahs a pair; out of which one is inherited from mother and 1 is inherited from father. Each human cell has 46 chromosomes which are arranged in 23 pairs.

A cell with 23 pair of chromosomes is known as diploid. Gametes which are formed from reproductive cell division have only 23 chromosomes instead 46 chromosomes. such cells are known as haploid. Chromosomes which belong to the same pair are called as homologous chromosomes.

Genes are composed of long strings or strands of DNA. The DNA is about 1 meter long, and the chromosomes in which these DNA lies, are in micrometers; so the DNA is wrapped tightly to fit in such small space.

DNA is a double-wrapped molecule; and is made up of two chains of nucleotides. Each nucleotide has 3 subunits:- 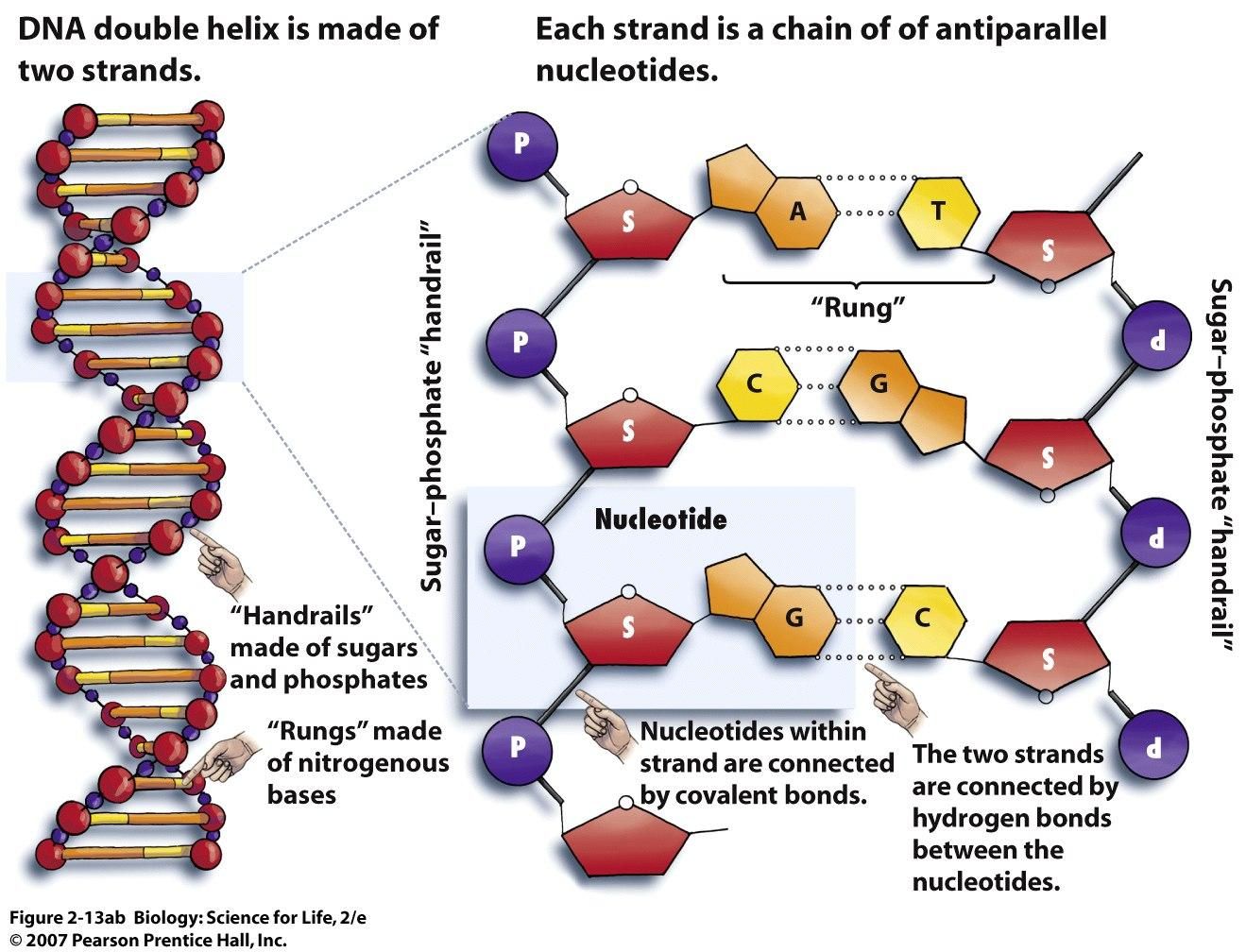 The DNA molecule is like a twisted ladder, where the uprights are formed by the alternating chains of sugar and phosphate. all the subunits of a nucleotide are interconnected to each other; like, the base is linked to a sugar, and also each base is bind to another base on the other sugar. The two chains are twisted around each other, which forms a helix shape arrangement. The double helix is further twisted around the structural proteins known as histones. These histones are important in maintaining the shape the shape of DNA. The DNA-histone are together termed as chromatin. The chromatin is completely coiled into the chromosomes before the cell divides.

The Genetic code:- DNA carries a huge amount of information that determines the biological activities of an organism; and which are transmitted from one generation to another. These information are mainly present in the bases within the DNA. There are 4 bases:-

These bases are arranged in precise order along the DNA strands. The bases makes the base code which and be read when the protein synthesis is required. Each base present on 1 strand of DNA, pairs with the base on the other strand of DNA in precise order. That is, adenine and thymine always go together, and cytosine and guanine are always paired. These bases are bonded with anther one with hydrogen bonding.

Mitochondrial DNA:-  Each body cell has 500 mitochondria. Each mitochondria has a number of DNA, known as mitochondrial DNA. It codes several info like the enzymes are important in energy production. The DNA is passed from one generation to another via the ovum; so the child’s complement of the mitochondrial DNA is inherited from mother.

Mutation means alterations caused in inheriting the genetic material of the cell. Causes of mutation includes:

Any factor which is able of mutating the DNA is known as mutagen. Most mutations are immediately repaired by the enzymes present within the cell; hence causes no permanent problems.

Sometimes the mutated cell is detected by the immune cells and are destroyed because they appear abnormal. Often the mutation to do not kill the cell but alters its functions and Sometimes mutation is dangerous, because it can disturb the cellular activity and can cause cell death. If the mutated cell is inherited from mother to the child,

Gene mutation are that can occur: Tautomerism: This occurs during replication of DNA in the cell nucleus. Tautomers are dissimilar pairs of nucleotide bases. Depurination: This is a chemical reaction that happens when the bonds break between the deoxyribose sugar in DNA and the purine base of guanine or adenine.

5 types of Chromosomal mutations are:–

Deficiency mutations occurs when the chromosomes are lost during the fertilization or development of the fetus.

2. Which cell does not contain the genetic material within its nucleus?
A. nerve cell B. RBCs
C. gametes D. both B and C

3. What is the shape of a chromosome?
A. V-shaped B. triangular shape
C. sausage shaped D. cube shape

4. Which of the following is the part of DNA?
A. sugar B. base
C. phosphate group D. all of the above

5. Which of the following statement is NOT true?
A. The genetic material lies within the cytoplasm of cell
B. the 22 pairs of chromosomes are known as autosomes
C. Gene contains code that makes specific type of protein
D. DNA contains 2 strands

6. What type of arrangement is seen in DNA?
A. helix shape B. straight strands
C. round shaped D. none of the above

8. What causes mutation?
A. excess of DNA replication B. exposure to chemicals
C. radioactive rays D. both A and B

9. Guanine always binds with which base?
A. cytosine B. thymine
C. adenine D. all of the above

10. The sex chromosome pair in males contains which two chromosomes?
A. XX B. YY
C. XM D. none of the above