Composition of Blood and MCQs For NEET, GPAT, Pharmacist and Staff Nurse Exam 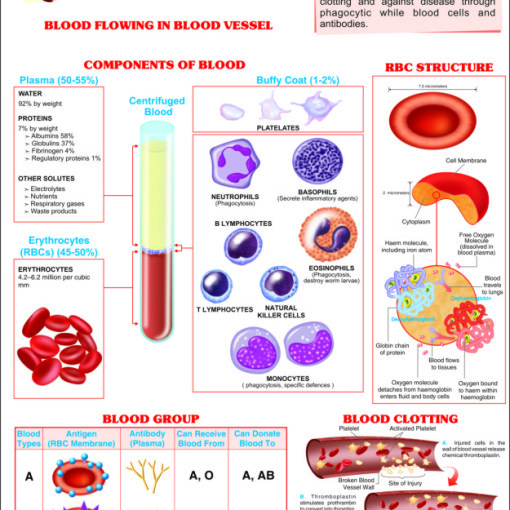 Above chart is taken from hemcmedical.com for educational purpose only

the formed elements include 3 basic components- red blood cells(RBCs), white blood cells( WBCs) and platelets. RBCs and WBCs are the whole cells while the platelets are the cell fragments. We will study a

1. Red Blood Cells:- These are biconcave disc of diameter 7-8 micro meters. Their plasma membrane is strong and flexible as they pass through narrow capillaries. Glycolipids are present in the plasma membrane of RBCs which provides antigens of various blood groups. RBCs lack nucleus and other organelles.  their cytosol contains hemoglobin molecules. Life span is 120 days.

The main and important function of RBC is to carry oxygen molecules to the tissue and cells. The hemoglobin molecules present in the cytosol of RBC carries the oxygen molecules. The Hb has a protein part known as globin and a non protein pigment known as heme. the globin contains 4 polypeptide chains, two alpha chains and two beta chains and an iron ion in the center of each heme ring. The each iron ion binds with oxygen ion. in this way each Hb molecule carries 4 oxygen molecule.

Platelets:- they are about 150,000-400,00 per microliter of blood. they have 2-4 micrometer diameter, lives for 5-9 days. they lacks nucleus but they have vesicles. Functions include formation of platelet  plug in hemostasis and releases chemicals that promotes vascular spasm and blood clotting.

2. Which protein is produced by liver?
A. albumin B. globulin
C. fibrinogen D. All of the above

3. Which of the following is involved in immune responses?
A. WBCs B. RBCs
C. platelets D. blood plasma

5. Which of the following statement is NOT true?
A. RBCs lacks nucleus
B. All the WBCs contains lobes
C. platelets have life span of 5-9 days
D. 90% of blood plasma is water

6. What is the shape of nucleus in monocytes?
A. kidney shaped B. sausage shaped
C. triangular shape D. round shape

9. What is the main function of RBCs?
A. immune surveillance B. produces histamines
C. platelet plug formation D. none of the above

10. What is the main function of neutrophil?
A. liberate heparin B. it has opposite effect to histamine
C. destroys bacteria with lymphocytes D. blood clotting