Hemostasis is a series of process which stops bleeding, when the blood vessel is broken or damaged this process takes place.

Using these clotting factors and following the 3 steps the clot is formed, these three steps are

There are two pathways in blood clotting 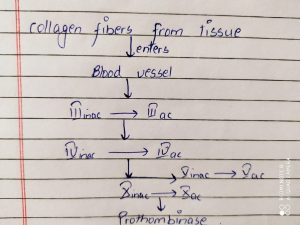 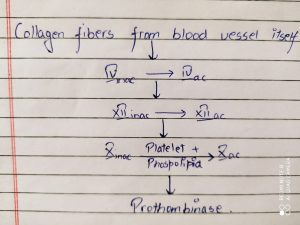 There is difference in the formation of first step of the clot, the other two steps are same for both the pathways 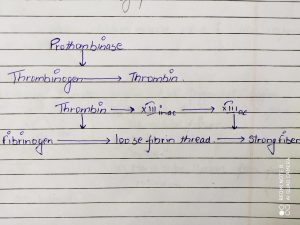 Due to injury at certain point of our body, the concentration of clotting factors increases which directs them to make fibrin thread, that’s why thin fibrin threads is not formed at other places.

After the complete repairing of the injury, plasminolysin which is present in an inactive form with the clot becomes activated and dissolves the formed clot, this process is known as plaminolysis. 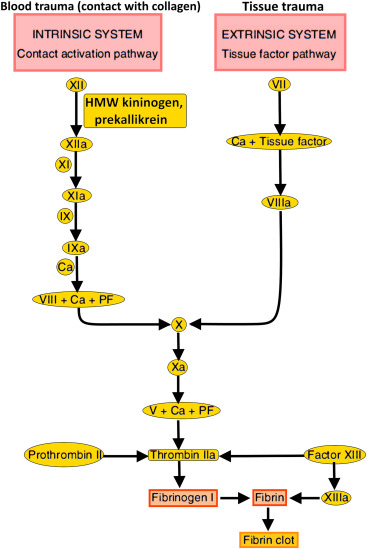 Modified from B. Ciesla, Hematology in Practice, F. A. Davis Company, Philadelphia, PA, 2007.

Above figure is taken from article Coagulation cascade (https://www.sciencedirect.com/topics/engineering/clotting-cascade) for Education purpose only

1. What do you mean by Hemostasis?
A. production of new blood cells
B. process by which bleeding stops from damaged blood vessels
C. normal body condition
D. none of the above

3. Why vascular spasm takes place?
A. due to damage in smooth muscle
B. due to release of substances by activated platelets
c. due to the reflex initiated by pain receptors
D. all of the above

4. Which of the following options does not come under the substances released by activated platelets?
A. serotonin B. ADP
C. urea D. Ca ions

5. Which substance along with thromboxane A2 helps activate other platelets during platelet plug formation?
A. serotonin B. ADP
C.ATP D. lysosomes

7. which of the following is the (iv) clotting factor?
A. Proaccelerin B. tissue factor
C. stable factor D. none of the above

8. Which of the following statement is NOT true?
A. hemostasis prevents hemorrhage
B. platelet plug is very effective in preventing blood loss from large blood vessels
c. vitamin K is required for synthesis for several clotting factors
d. the clot formed is a gel like substance

9. Which of the following is effective in dissolving the clot formed after complete repair of injury?
A. hageman factor B. plasminolysin
C. christmas factor D. tissue factor

10. Which of the following do not take part in the extrinsic pathways for the formation of prothrombinase?
A. tissue factor B. prowar factor
C. stable factor D. Ca ions