This fusion of protoplast is done by three methods 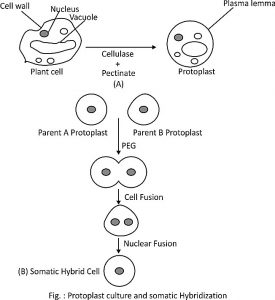 Generally, 20-25% of the protoplast is involved in the infusion process. Alter fusion is completed, the fused protoplasts contain homokaryons (unfused chloroplasts) and heterokaryons among the total protoplast population. Hence it is necessary to identify hybrid cells or so-called heterokaryon. This is done by biochemical method, cytometric methods, and visual method.

This process is required for the genetic contribution of the parental protoplast to develop hybrid cells and then to develop a hybrid plant. Identification can be done by molecular techniques like PCR, counting the number of chromosomes, isoenzymes analysis of hybrid plants, etc.

Cybrids, in which, the cytoplasm is derived from both parents and the nucleus from one parent. The phenomenon for the formation of Cybrids is known as cybridization. Cybrids are hybrids only for cytoplasm.

Somatic embryos are the same as sexually formed or zygotic embryos, which can be excised from parent tissues and induced to germinate into culture media.

Somatic embryogenesis can be done by two methods

1. Which of the following can be done in different plant species

a) It can be done in the same plant

b) It can be done in the same plant species

c) It can be done in different plant species

a) Identification of hybrid plant

7. The following are the methods used in hybrid cell selection EXCEPT:

10. Which of the following type of plant cells can be used for somatic embryogenesis

a) Palisade cells of leaves